The Ferrari dealer in Turin was inaugurated in May 2017 according to the latest corporate identity updates.

The Ferrari dealership of Turin inaugurated in 2017, headquarters of Piedmont, Liguria and Valle d ‘Aosta, was built in the former area of the Roz Foundries in Corso Lione.
The building develops for about 1600 square meters on two levels. The project has maintained some characteristic components of the pre-existing industrial site such as the brick façade with a Gothic style texture, the access entrances, the internal courtyard and the perimeter limit of the building curtain.
The building is presented to the city with two avant-corps made light by large windows in extra-clear crystals in which new cars are displayed in one, in the other, used cars. The call of the external view extends into the internal courtyard where loopholes have been obtained adjacent to the driveway and pedestrian entrances through which we have tried to give continuity to the view of the cars on display.
On the ground floor there are the premises for primary and secondary exposure, reception, administrative offices, delivery room, lounge, car configurator office, while the basement is placed the cars garage.
In the node of the stairwell connecting to the garage in the basement there is an exhibition corner where a Formula 1 as absolute protagonist emerges. The structure, in the shape of an upside-down pyramid, stands with the glazed roof whose diamond cut points towards Maranello.
The interiors have been set like the pieces of a puzzle to satisfy the emotional crescendo that ends with the ceremony of delivery of the ordered car. The Atelier is the heart of the FERRARI craft experience. Three niches show the samples of the different metallic paints, leathers, circles, steering wheels and calipers with which it is possible to personalize the car. The customization of the car starts here, on an oak veneered table, next to a 65 ”plasma screen embedded in red lacquered glass.
The objective achieved by the project was to create a neutral and aseptic appearance through the white color characterizing all surface finishes with the aim of enhancing the Ferrari cars on display and the graphics that follow a specific criterion according to the thematic area in which they are placed. 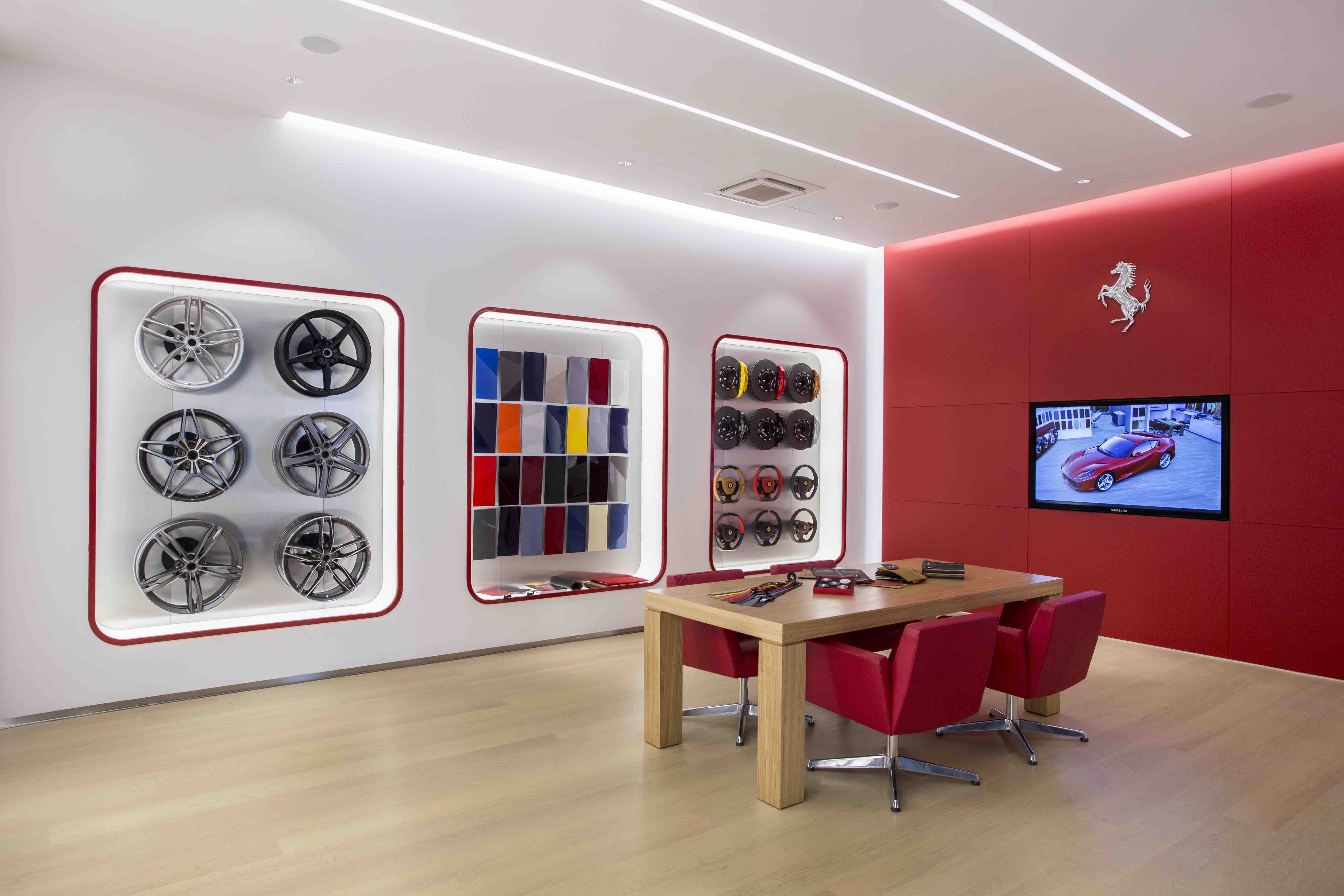 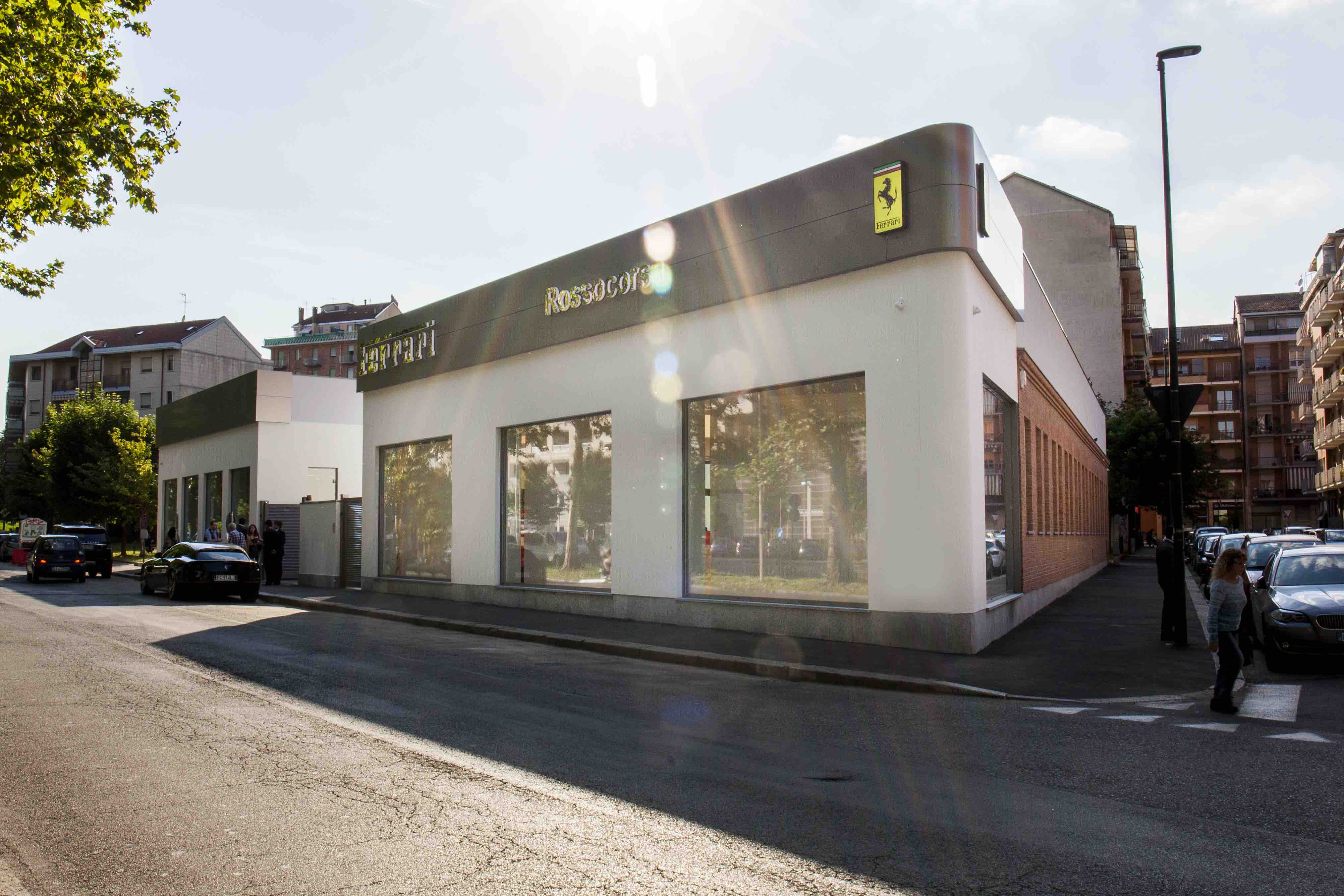 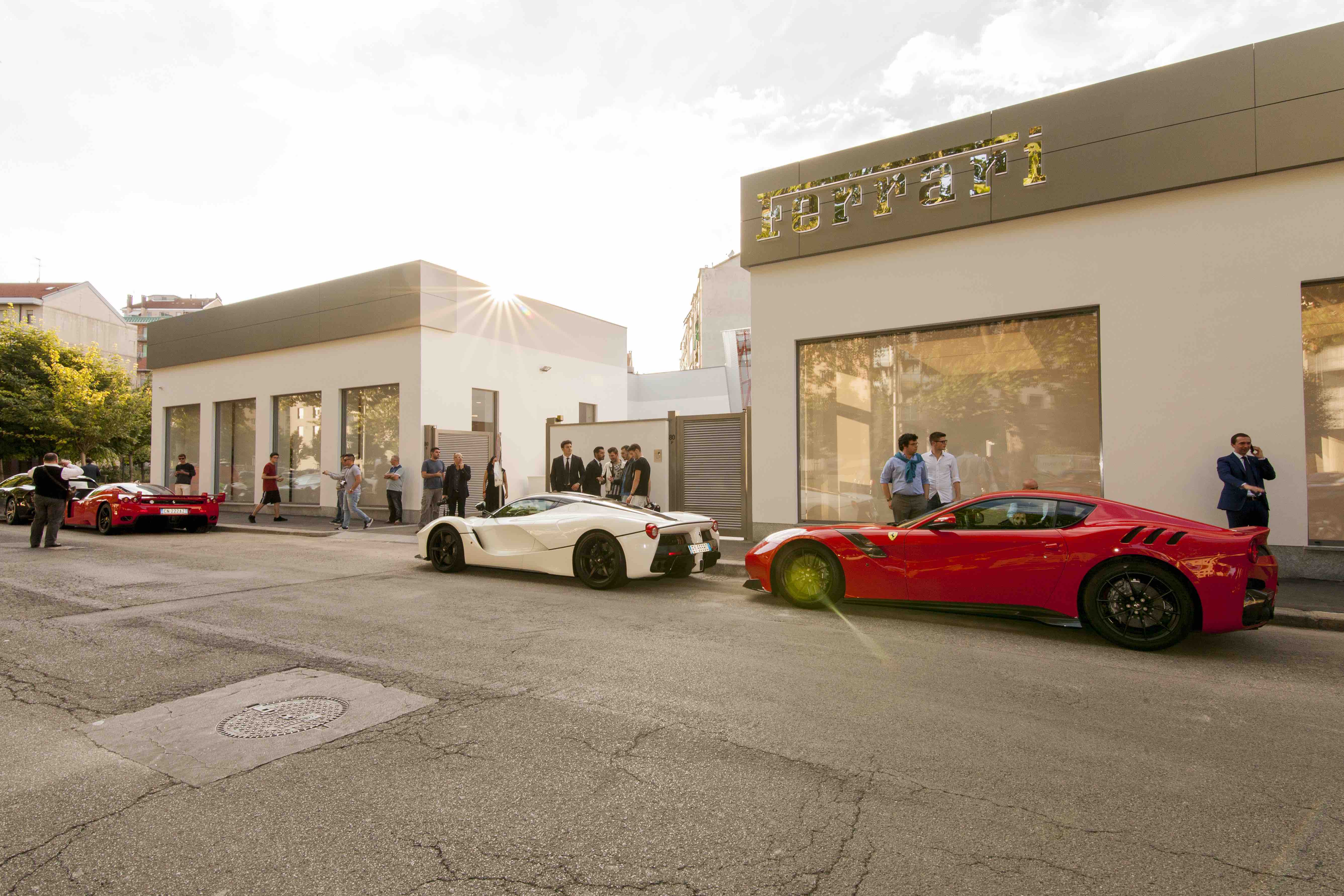 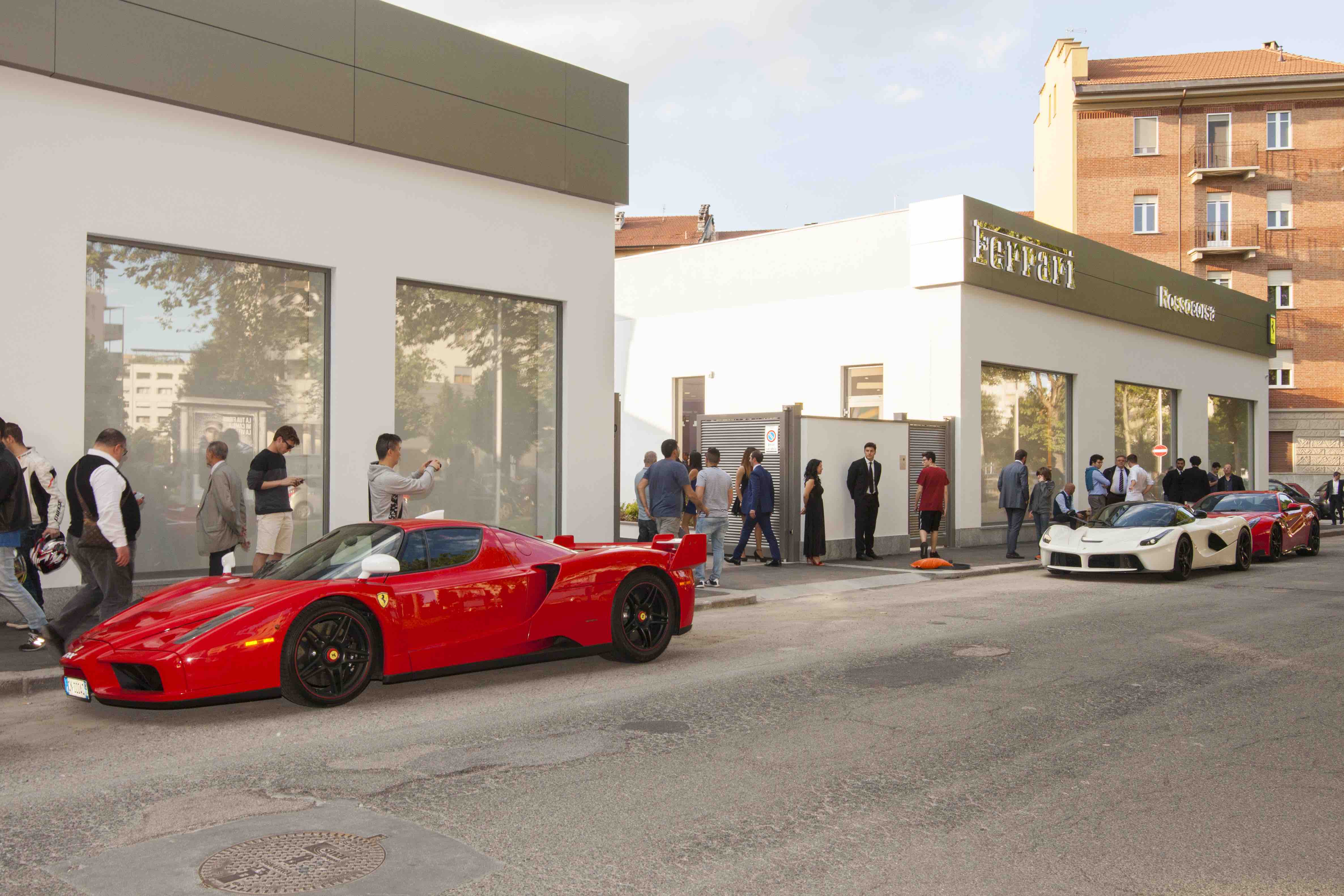 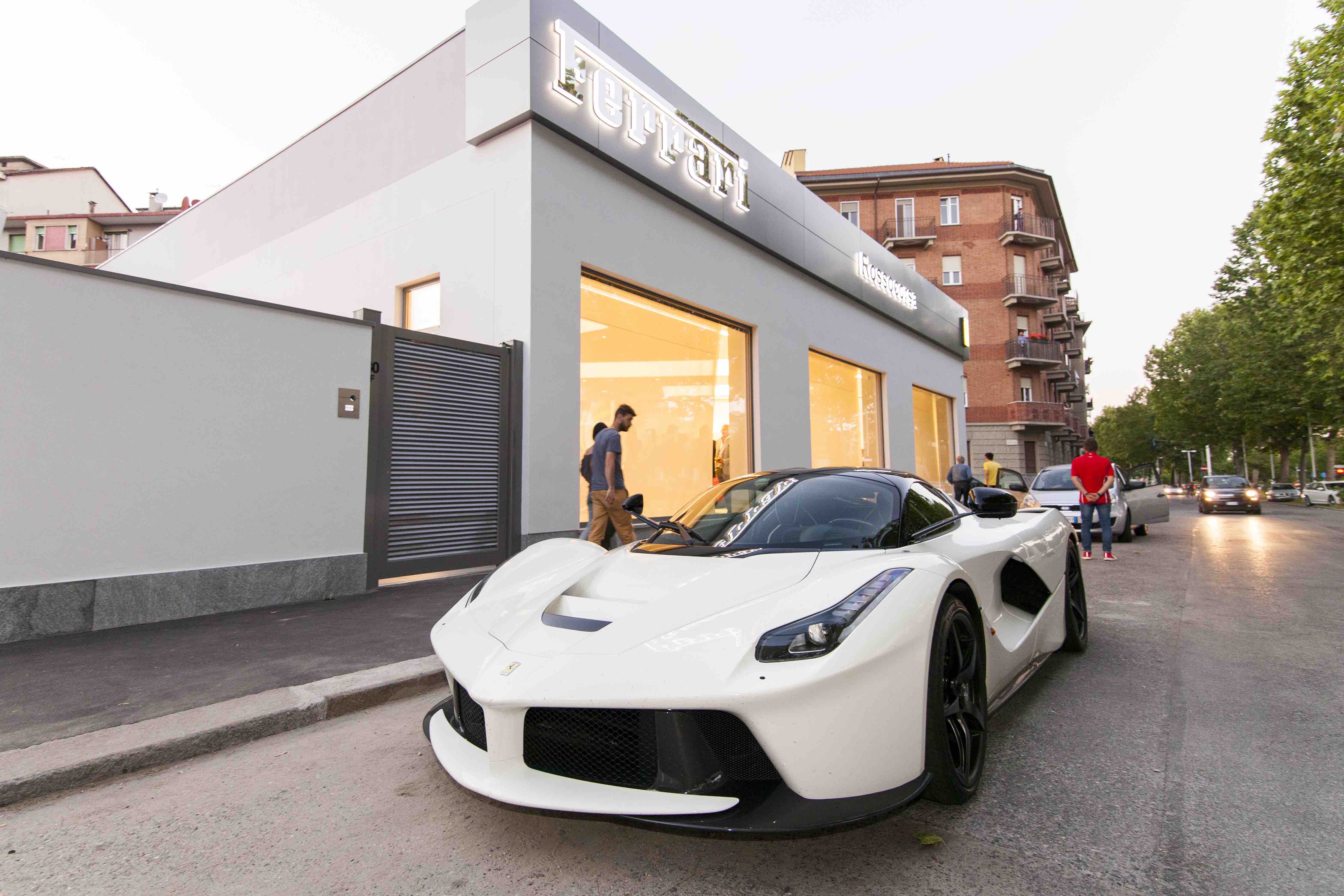 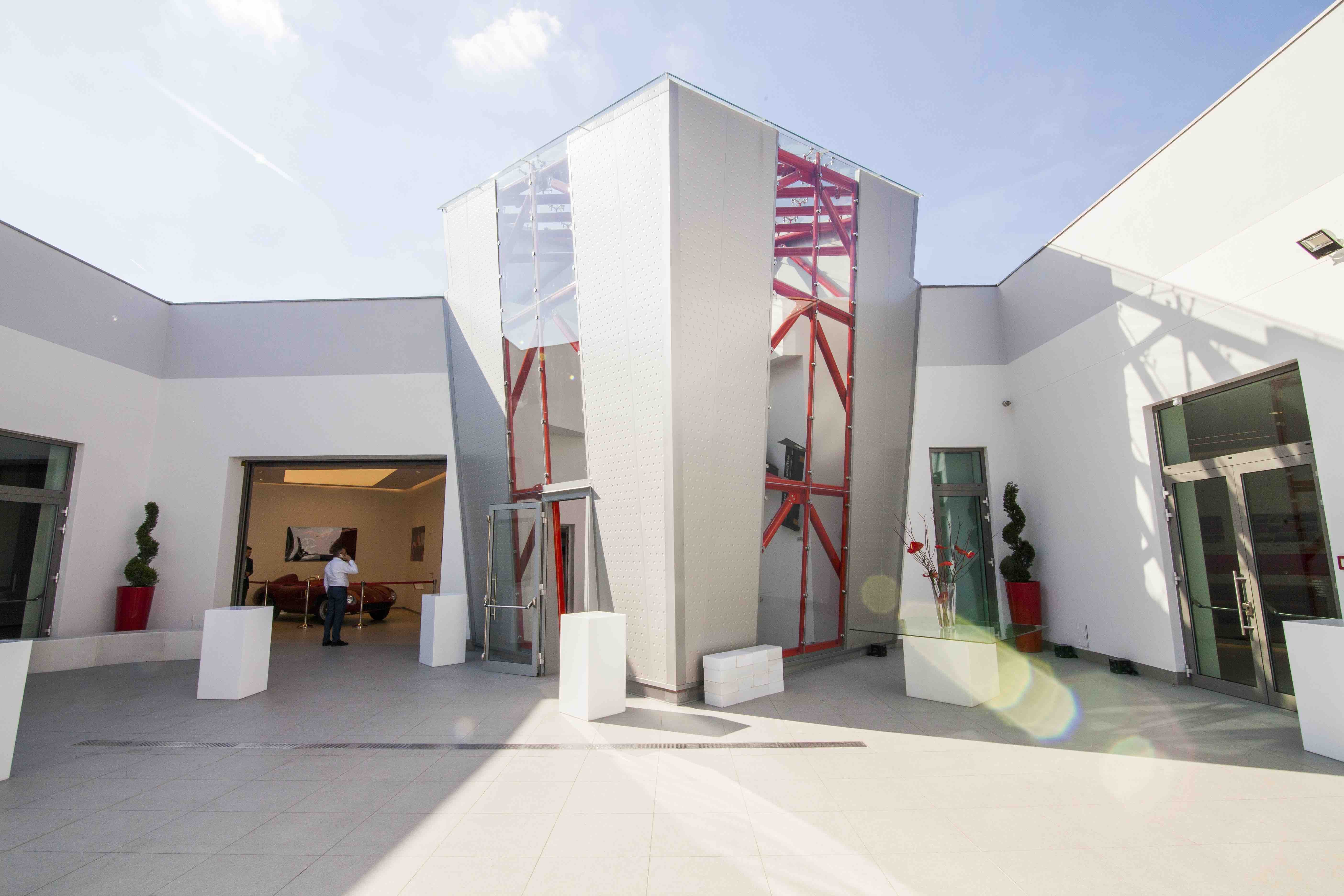 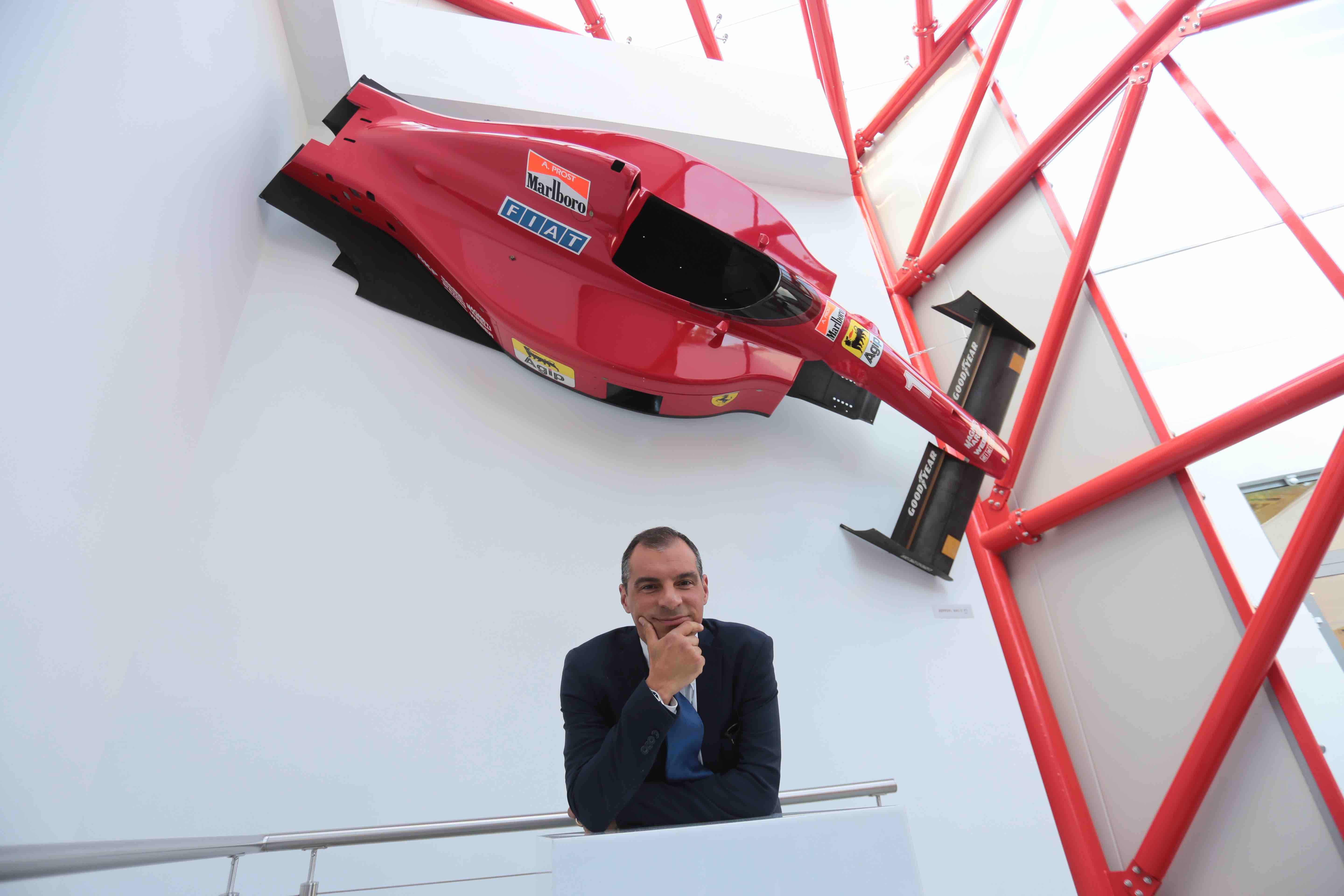 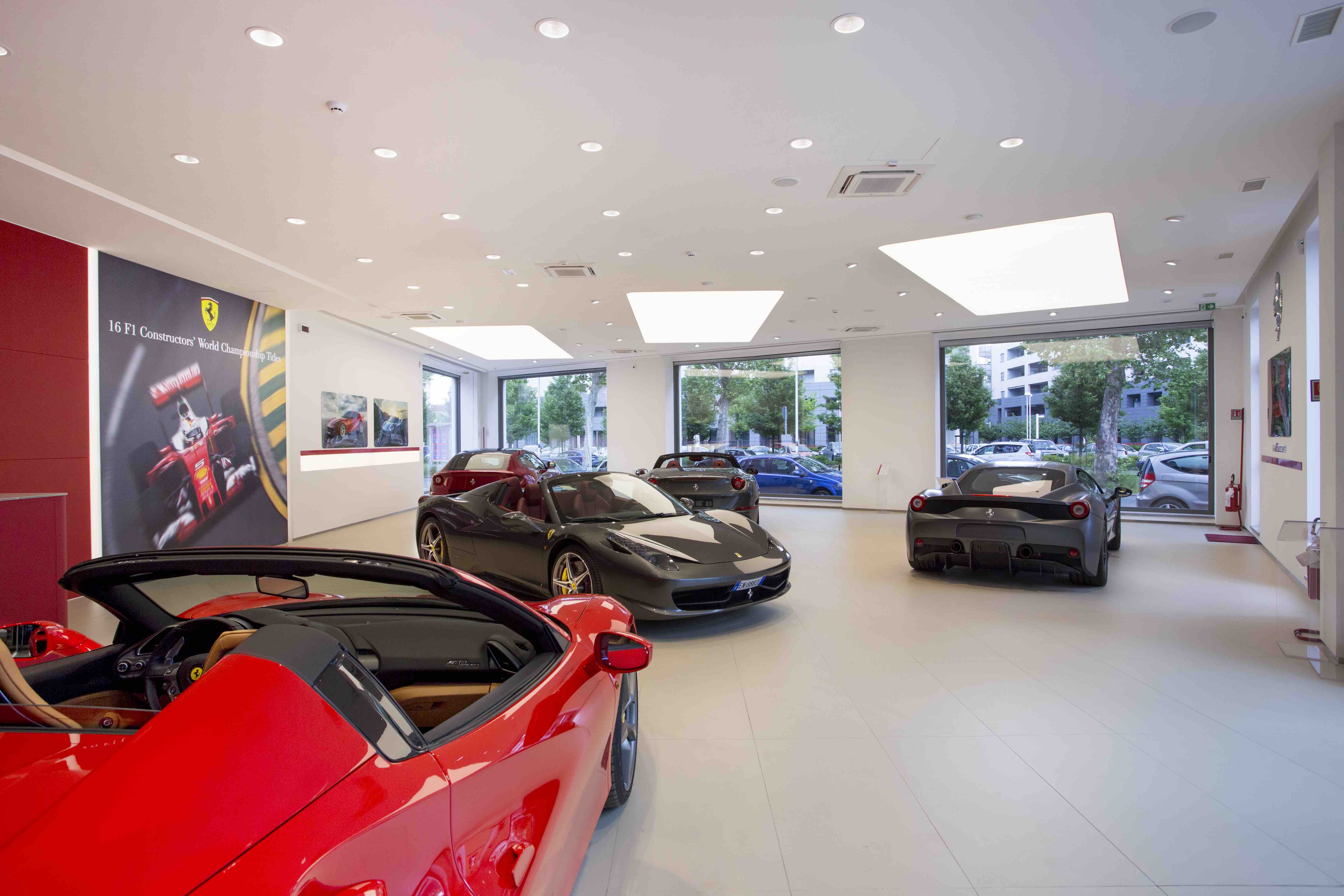 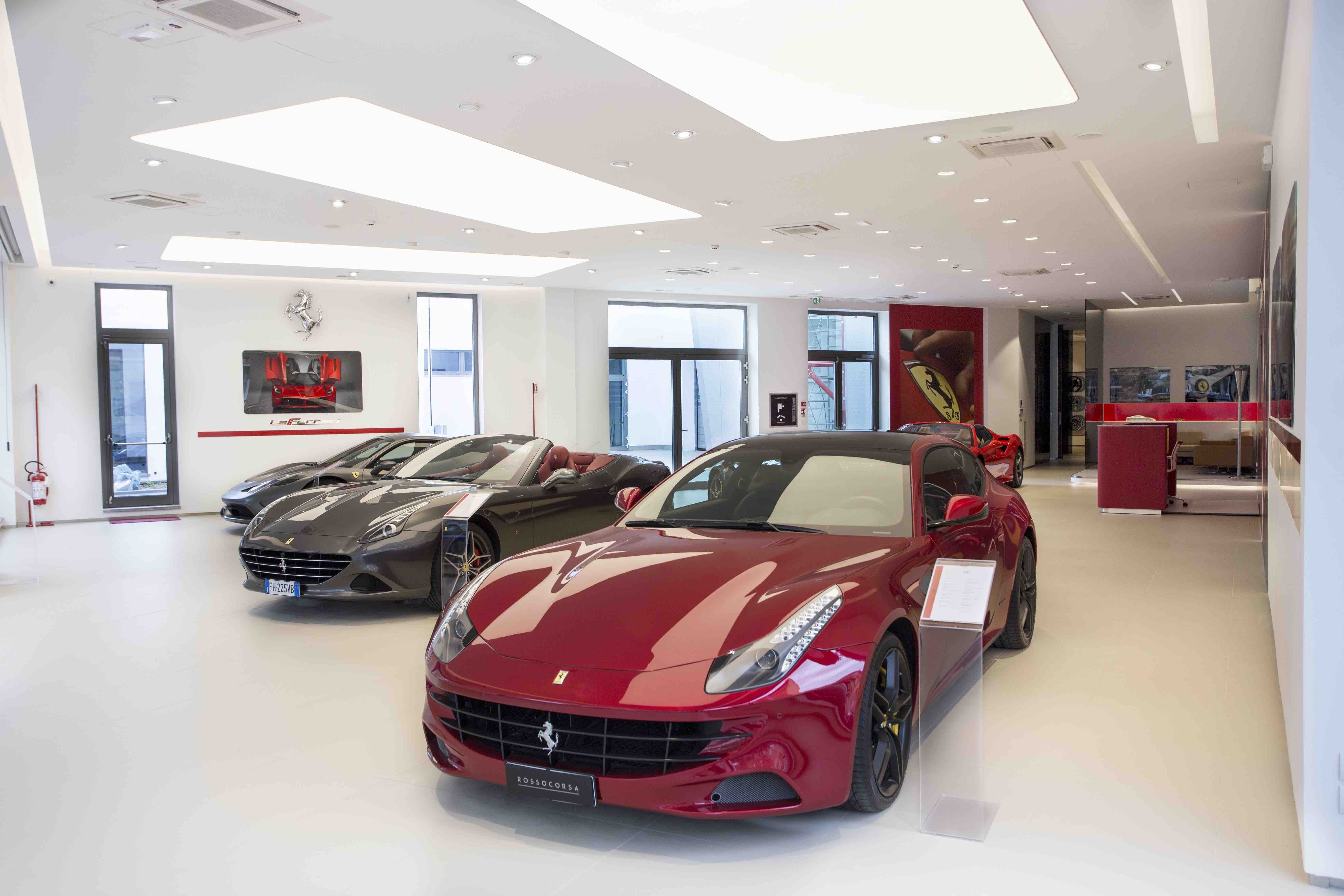 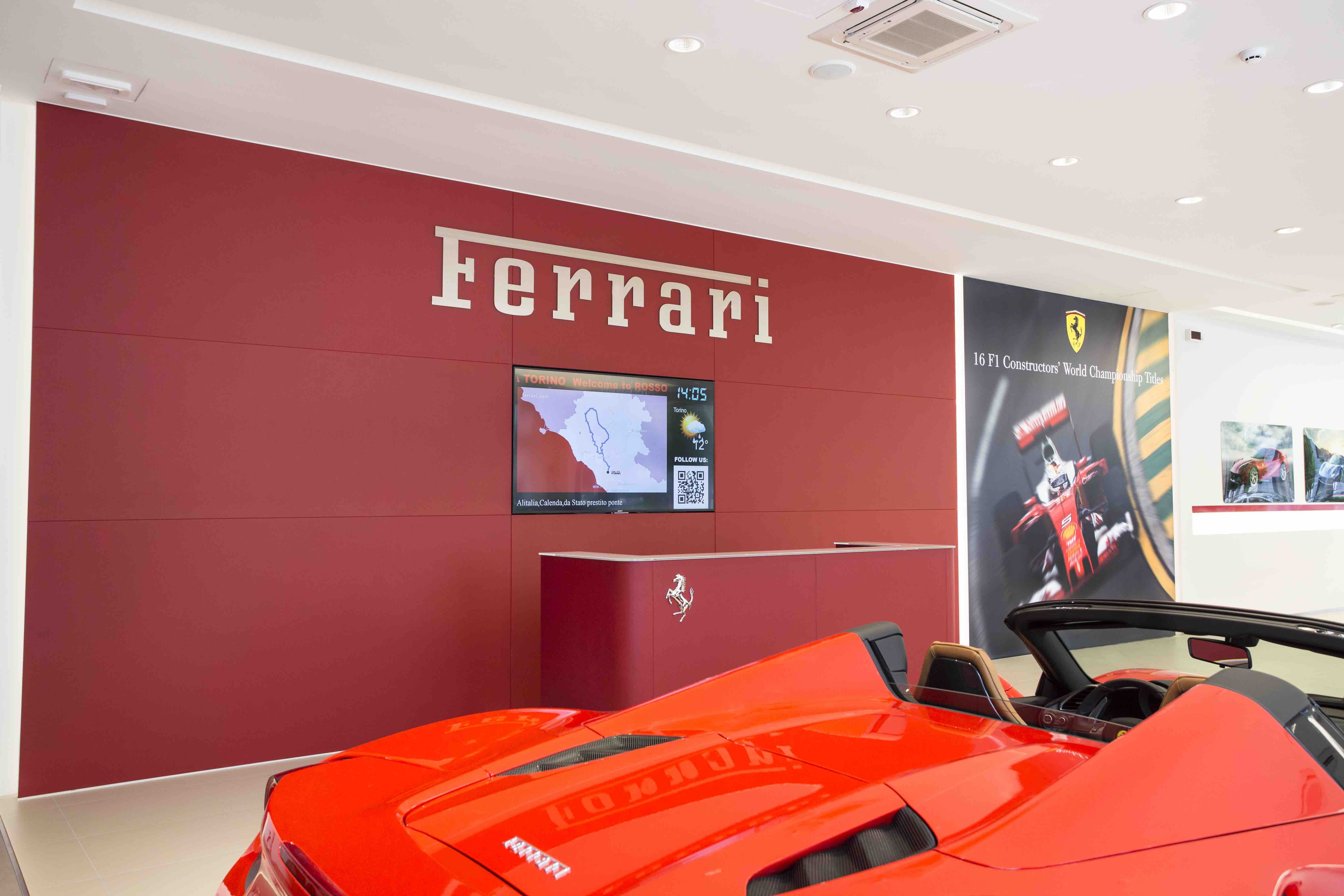 Paolo Romeo Architetto
The Architecture Studio PAOLO ROMEO ARCHITETTO (TURIN 03 May 1969) was founded in 2000 by virtue of the collaboration exercised since 1989 with the family's activity in the field of civil and industrial construction. In 1996 he graduated from the Faculty of Architecture of the Polytechnic of Turin and followed the coordination between the technical office and the construction sites of the F.LLI ROMEO, SOGEMA, NUOVAUPIR construction companies. In 1998 he enrolled in the Order of Architects of the Province of Turin Serial number 4621. From 2002 to 2010 he was Technical Director of F.LLI ROMEO COMPANY. From 2002 to 2006 he was Technical Director of SOGEMA COMPANY. Since 2002 he has been enabled to the role of Security Coordinator (Legislative Decree 81/2008). Since 2010 he has been exclusively practicing architectural design and safety coordination. Since 2012, the Studio has been based in Corso Stati Uniti, 27 in Turin, in the period building inside the courtyard of Palazzo Ceriana Meyneri. The experience lived in the construction site has indelibly influenced the conception of the design that reconciles the practicality and essentiality of the solutions with the innovation of the architectural choices.
http://www.paoloromeoarchitetto.it
Previous Article
LIBERTY AND CORTEN
Next Article
Disney Home