“Houses like children do!” it has been the original design idea born from the composition of simple volumes

The architectural idea gives shape to simple volumes, covered by a roof with a high slope to remember the mountains behind. They contain the different housing functions for a family of 4. The two-storey house has a distributive thorn, the staircase, the edge on which rest all the environments that develop with different depths, designed and sized to rationalize the spaces, but trying to give rise to bright and comfortable environments.
The large windows of the living area allow natural lighting and create a direct relationship between inside and outside; the same are protected by a bioclimatic pergola, positioned to the south, which gives life to a large external space as a natural extension of the internal functions.
Many custom-made furniture personalizes the rooms: from the secondary entrance a linear wardrobe becomes one with the kitchen, designing an equipped wall that transforms itself from a simple wardrobe, to become a pantry and then a kitchen, the heart of the house.
The bedrooms, placed on the upper floor, have an exposed ceiling: the wooden roof is visible from the inside and is made by a particular structure in lamellar wood portal with no ridge beam.
The choice of construction and finishing materials has been carefully thought to obtain a building that is both aesthetically pleasing and optimal from the point of view of energy performances.
The building has been designed following the rules of a NZEB building (Nearly Zero Energy Building), that means it’s a building with very high energy performances, with a very low energy requirement, significantly covered by energy from renewable sources produced with a PV system (about 4kW) placed on the roof.
The project followed also the bioclimatic architecture criteria and tried to satisfy the comfort requirements with a passive control of the microclimate, minimizing the use of mechanical systems through the efficiency of energy exchanges between building and natural environment surrounding. The building is compact and oriented to exploit the solar contribution; the casing (made by walls, ceiling and windows) is very insulated and shaded to avoid both heat loss and overheating, in order to always preserve the indoor comfort.
Architectural design and system project have been integrated from the beginning.
The heating system uses a high efficiency air heat pump generator that powers a radiant floor system with a low flow temperature and allows the temperature regulation of for each room.
In order to reduce heat losses due to air exchange, a controlled mechanical ventilation system with a heat recovery unit has been installed inside the building: it allows the recovery of over 80% of the outgoing warm air and is re-used to heat the incoming air.
The same heat pump used for heating powers the cooling system, which allows you to reverse cycle and to work as a chiller.
Energy consumptions are constantly monitored by a building automation system that allows well manage them all.

“Houses like children do: architecture as metamorphoses of ideas to progressive materialization” 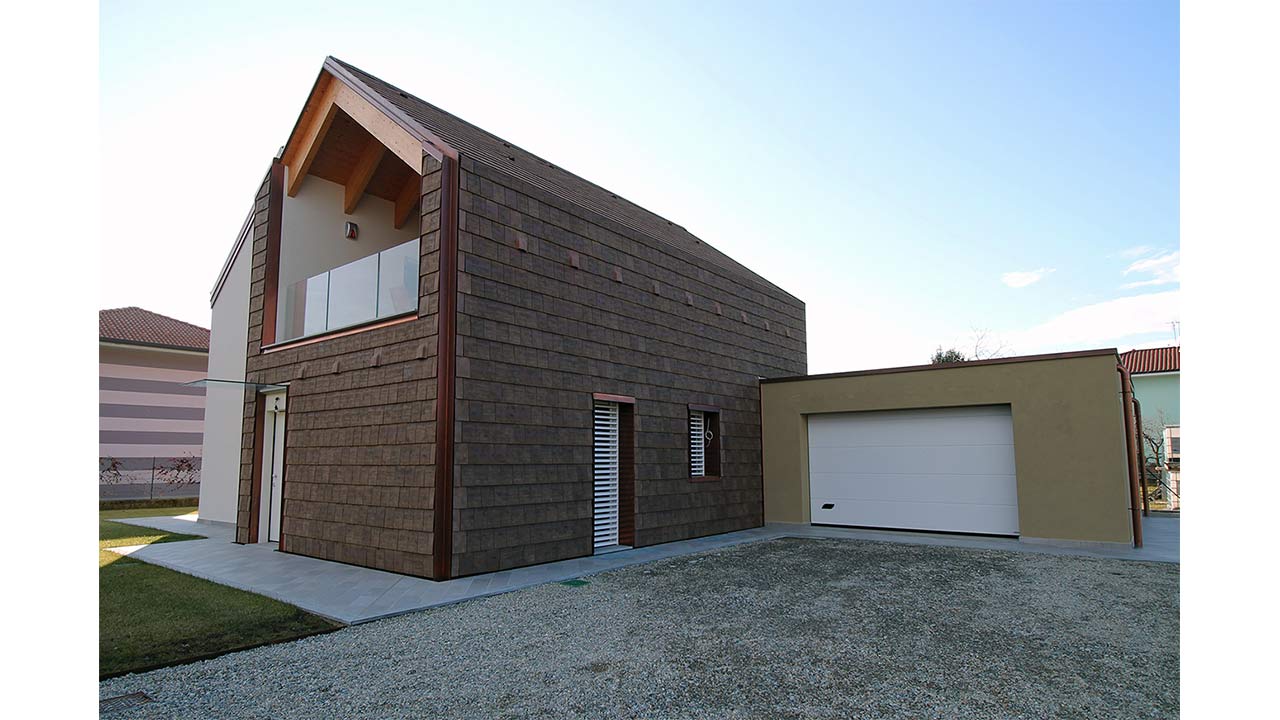 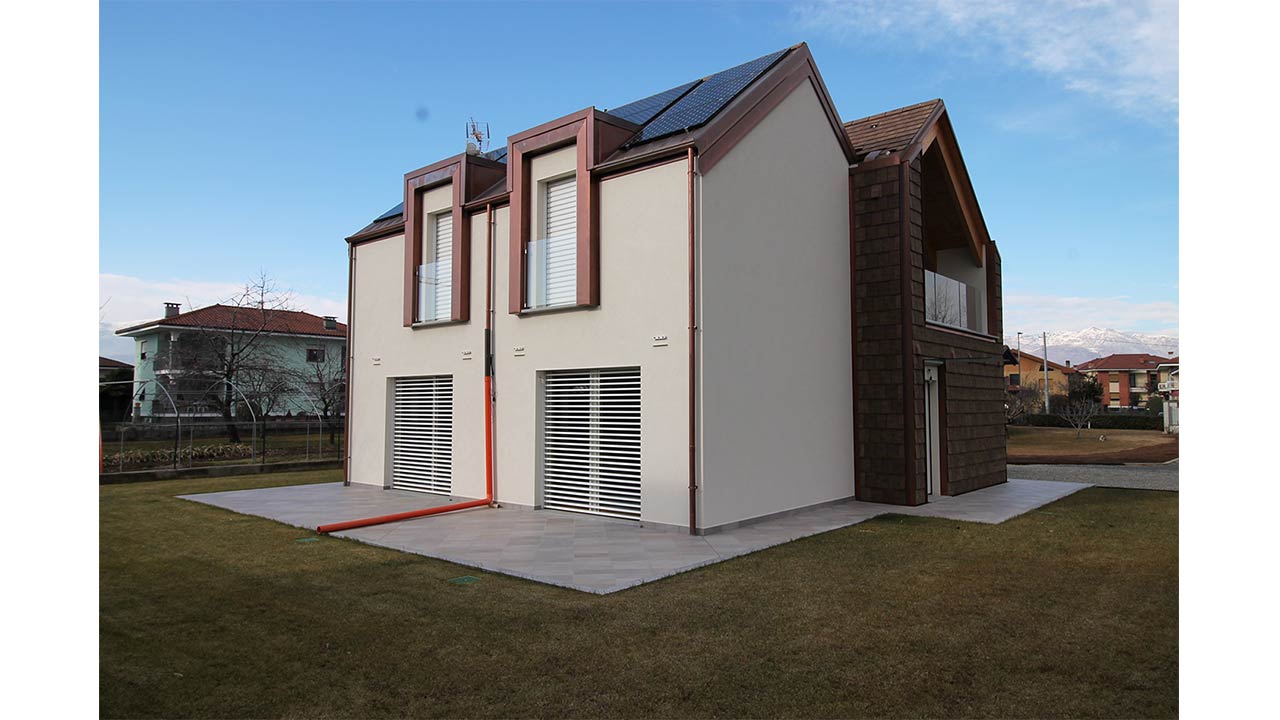 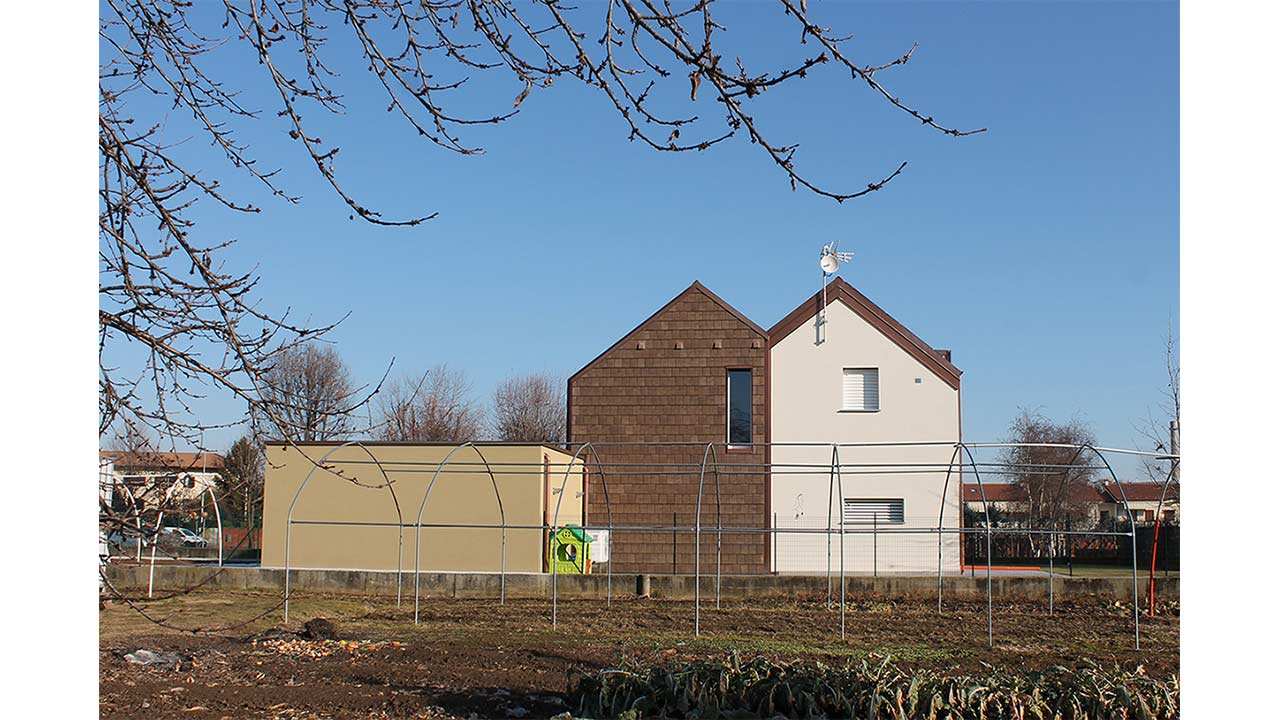 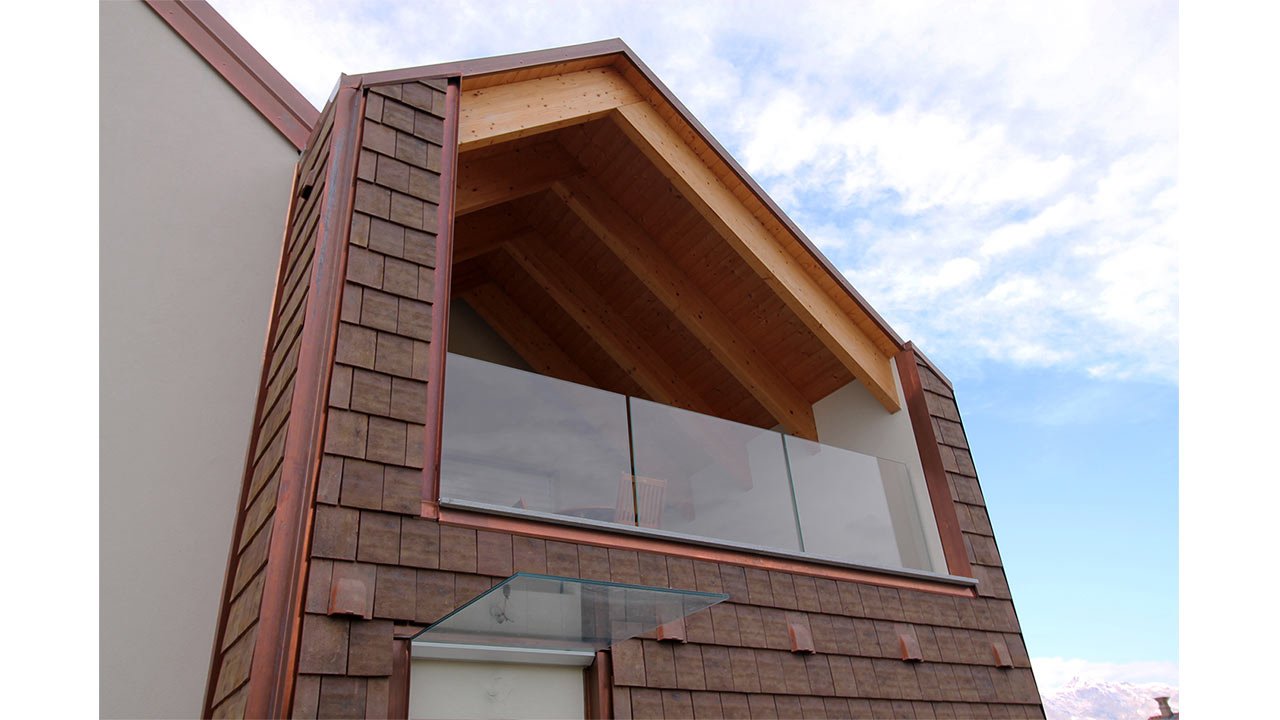 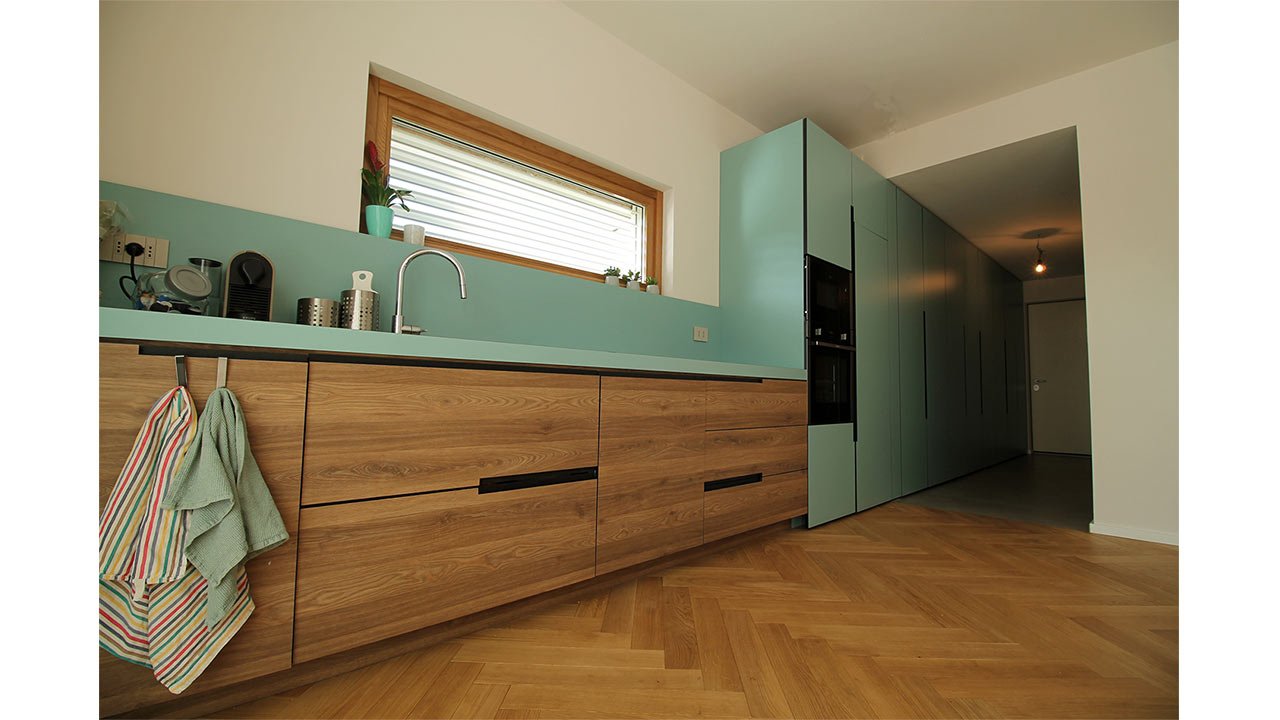 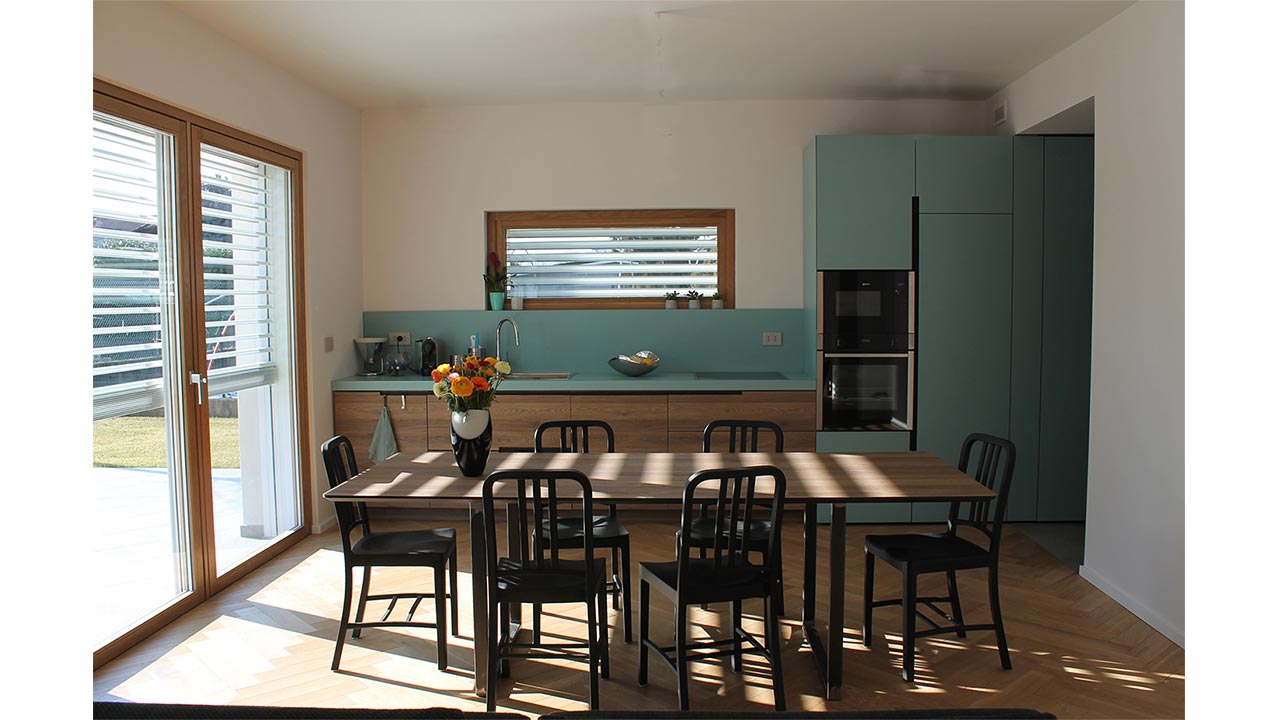 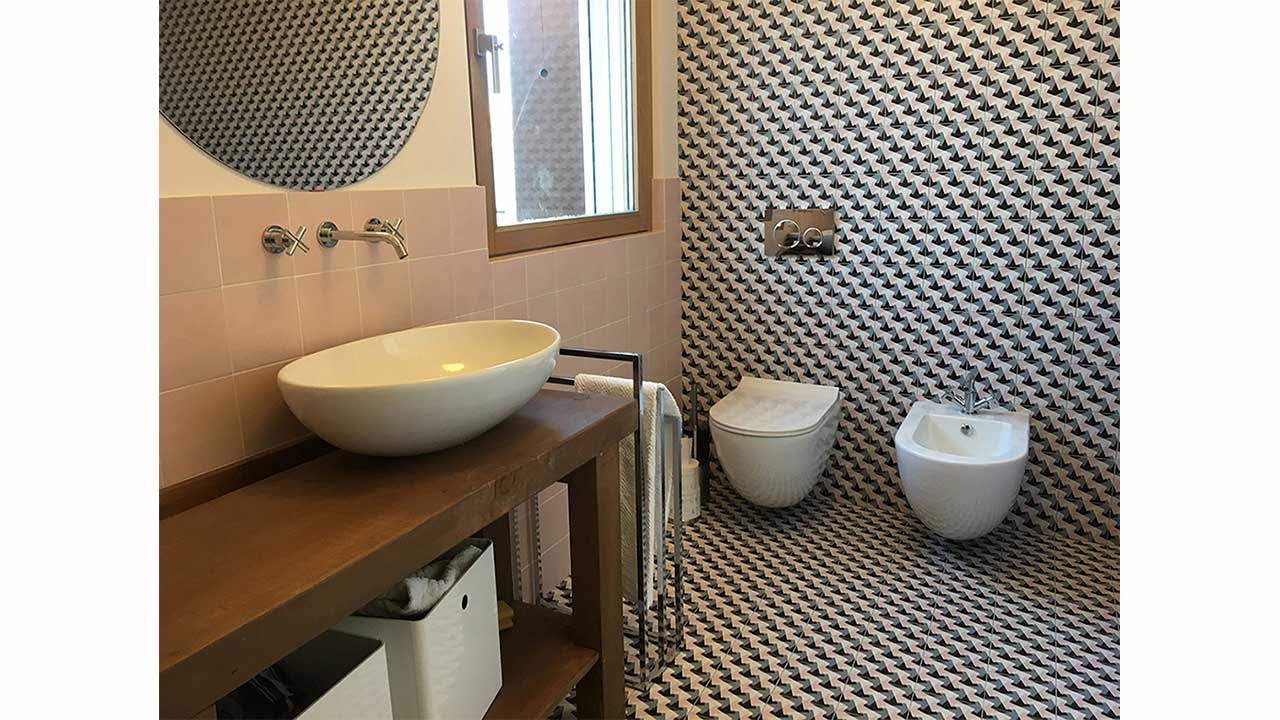 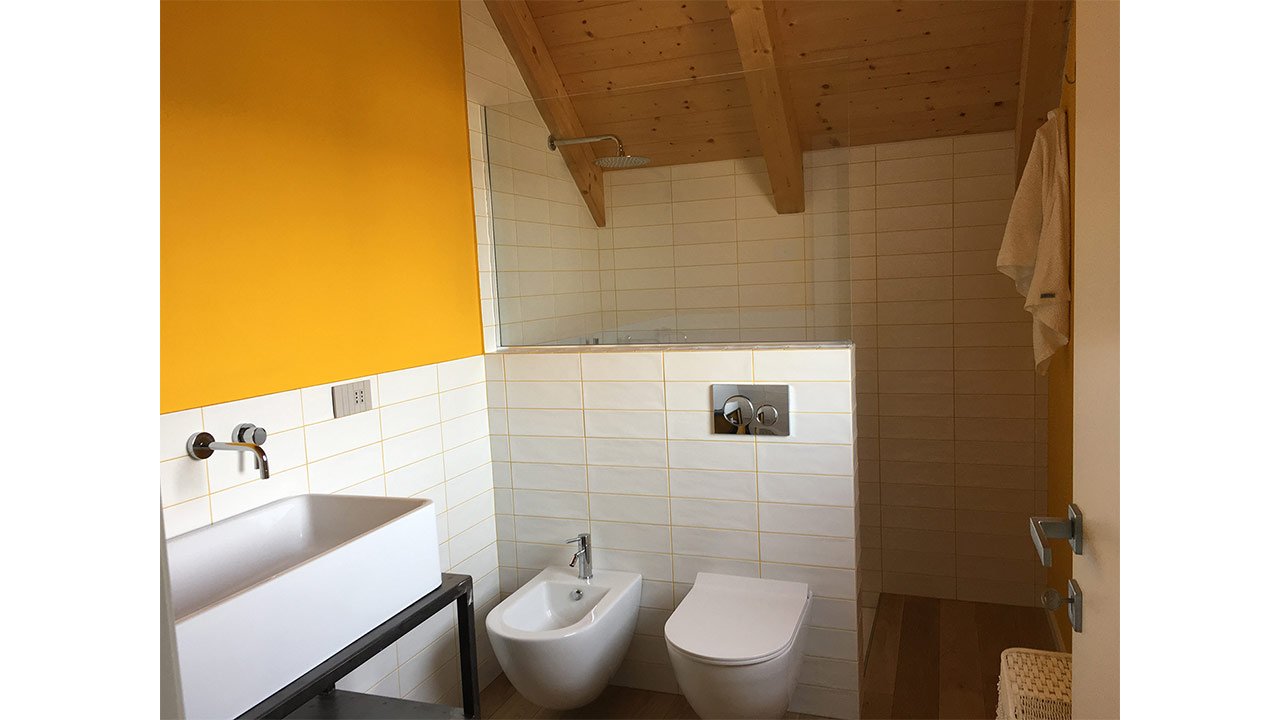 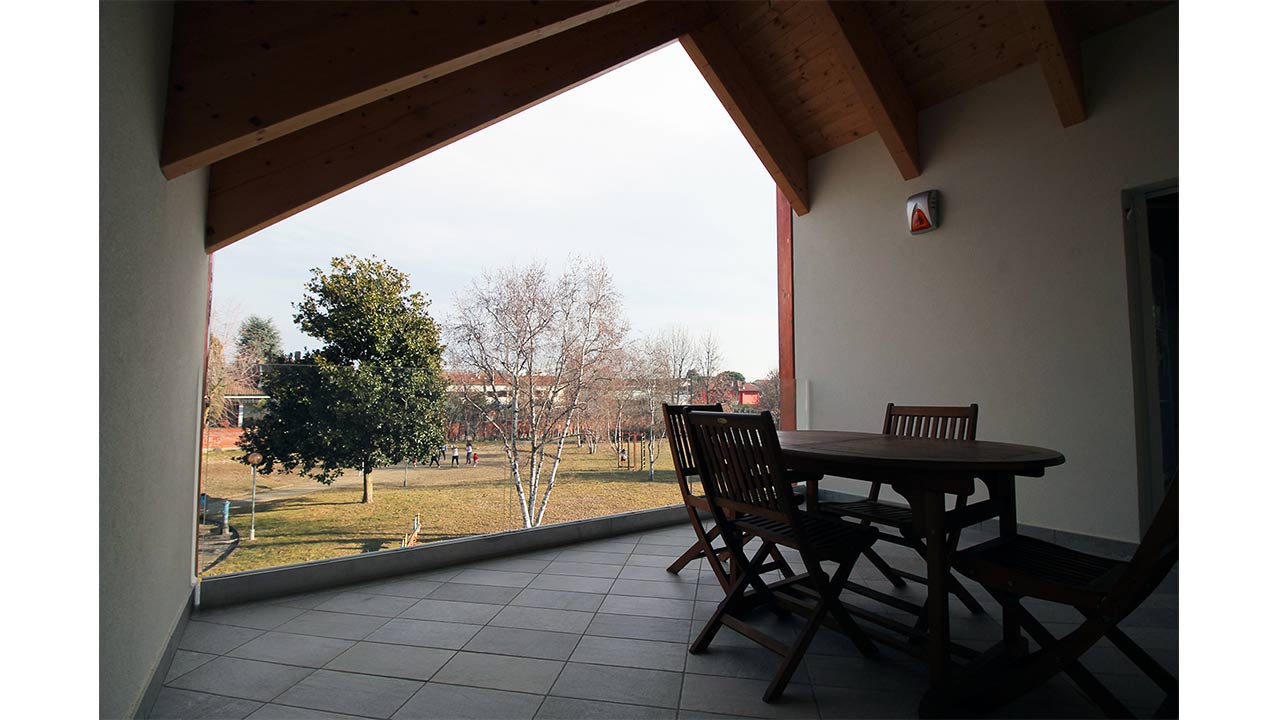 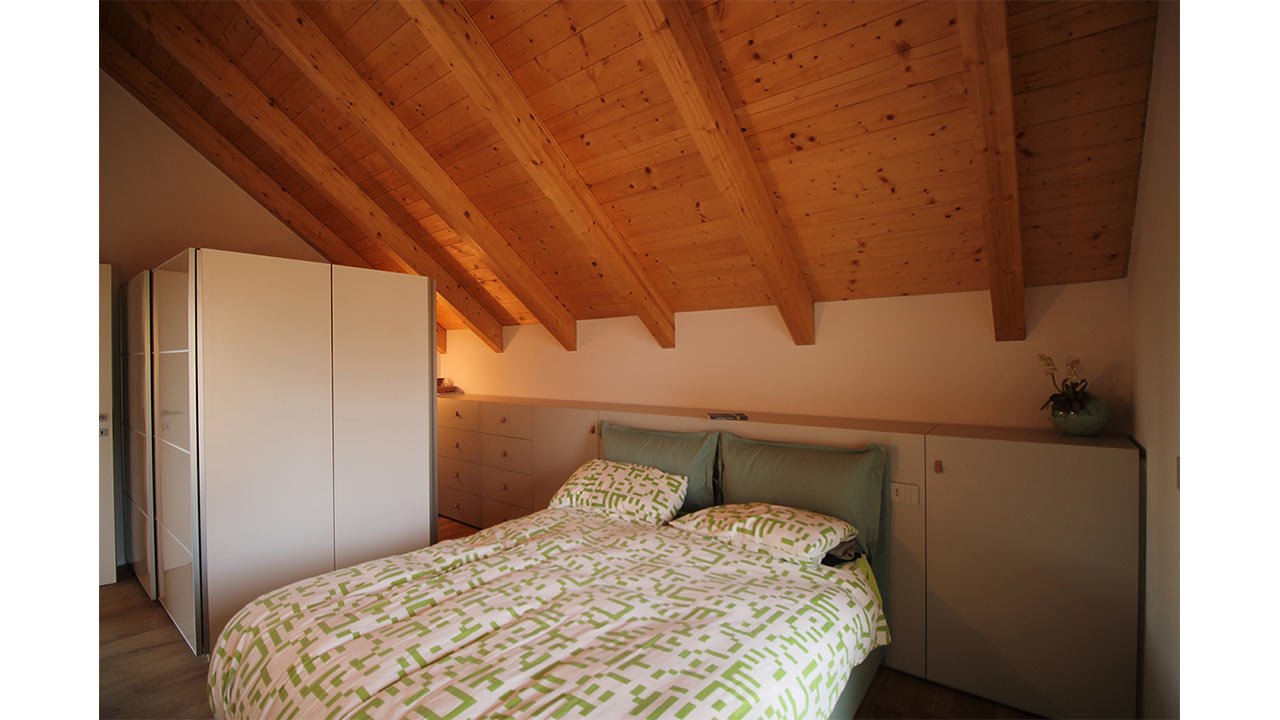 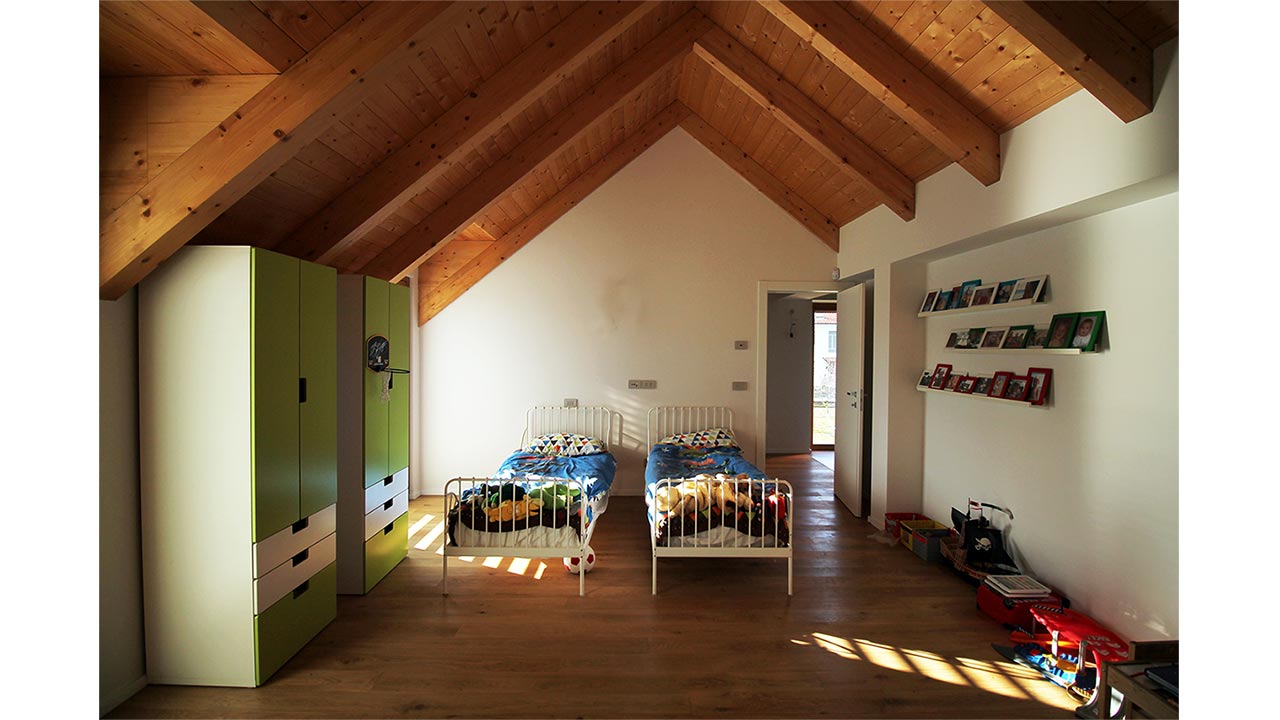 The ventilated façade has been realized with small flat clay roof tiles “Arboise” made by Edilians, previously the Imerys TC, produced in the furnace of Commenailles: the tile module has been suitable to be used both as a covering as a facade cladding. All the tiles were laid and fixed on a wooden frame structure and distributed on vertical and horizontal streams; special pieces have been used for the edges on the façade and on the roof.  Corner fittings have been designed in detail and realized in customized as copper objects.
For the interiors have been used almost everywhere wood finishes as flooring for the rooms and colored abstract design tiles for bathrooms.
Custom-made furniture has given rise to equipped walls: in the living room the cupboard in the kitchen becomes a large containers and in the bedroom becomes bedside tables and drawers, occupying perfectly the area with lower height. The furniture’s materials used are varnished MDF (Medium-density fibreboard) and laminates with particular details of milling in grooves and drawings. 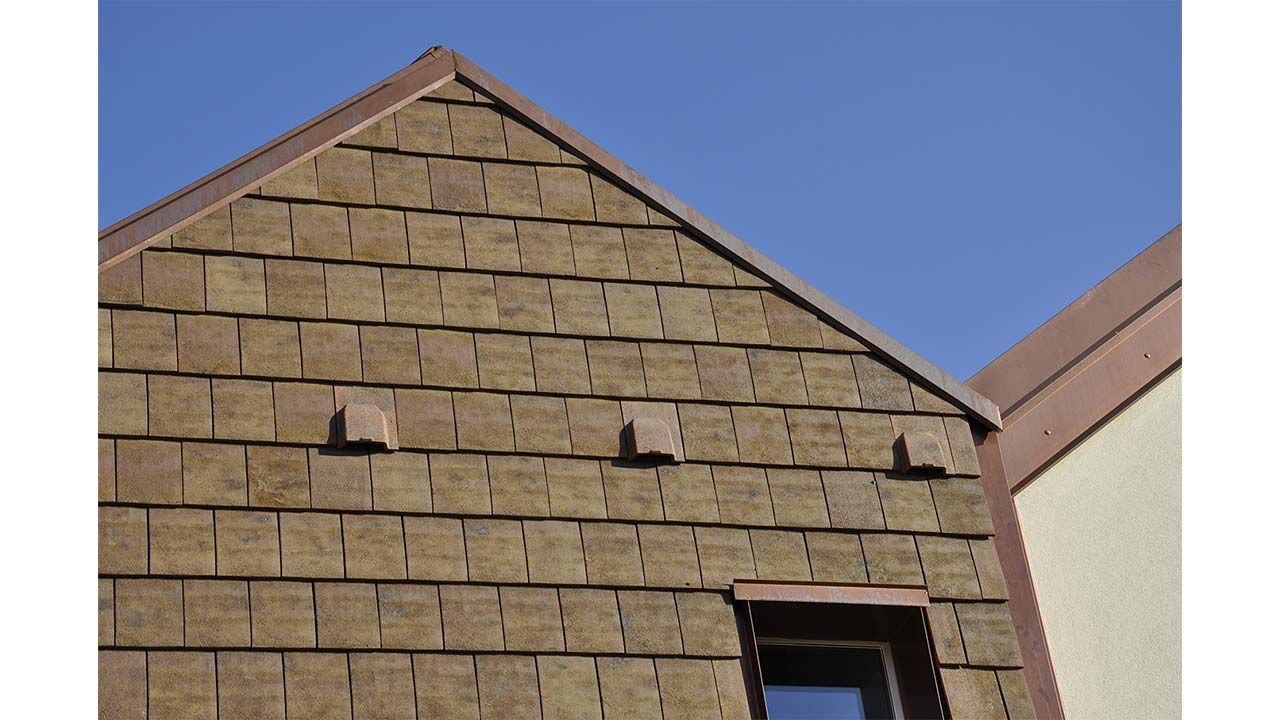 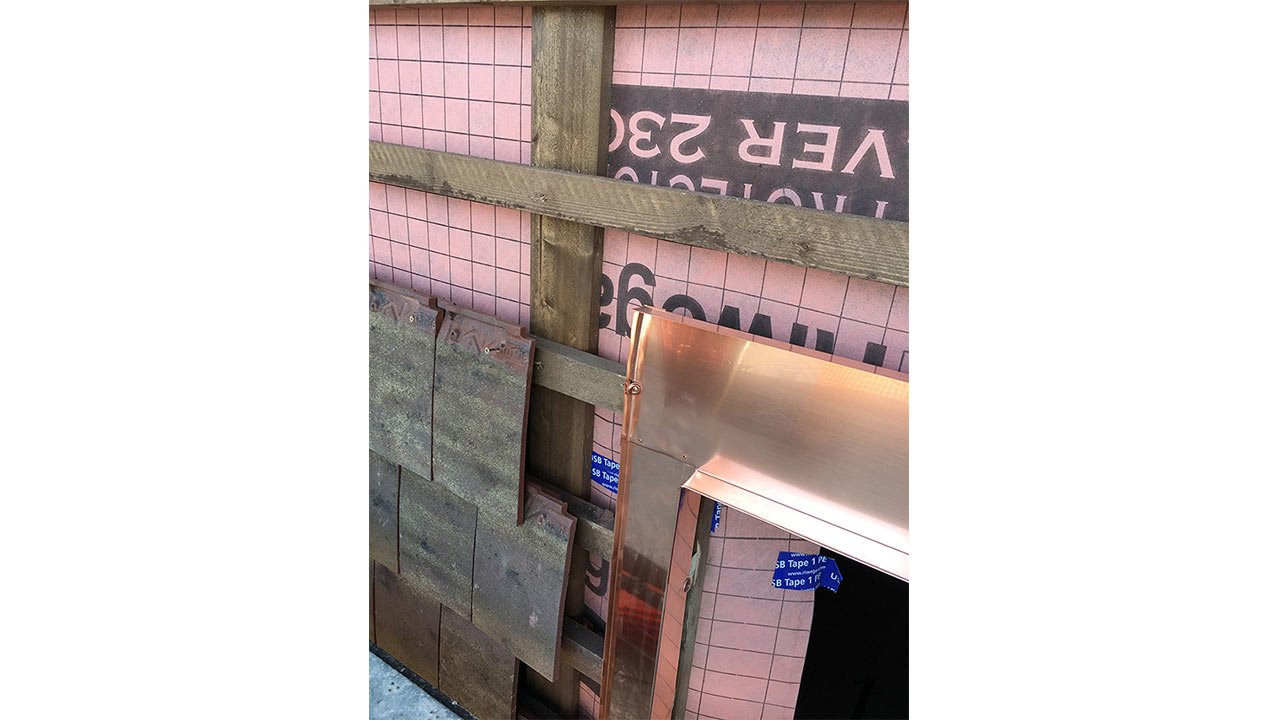 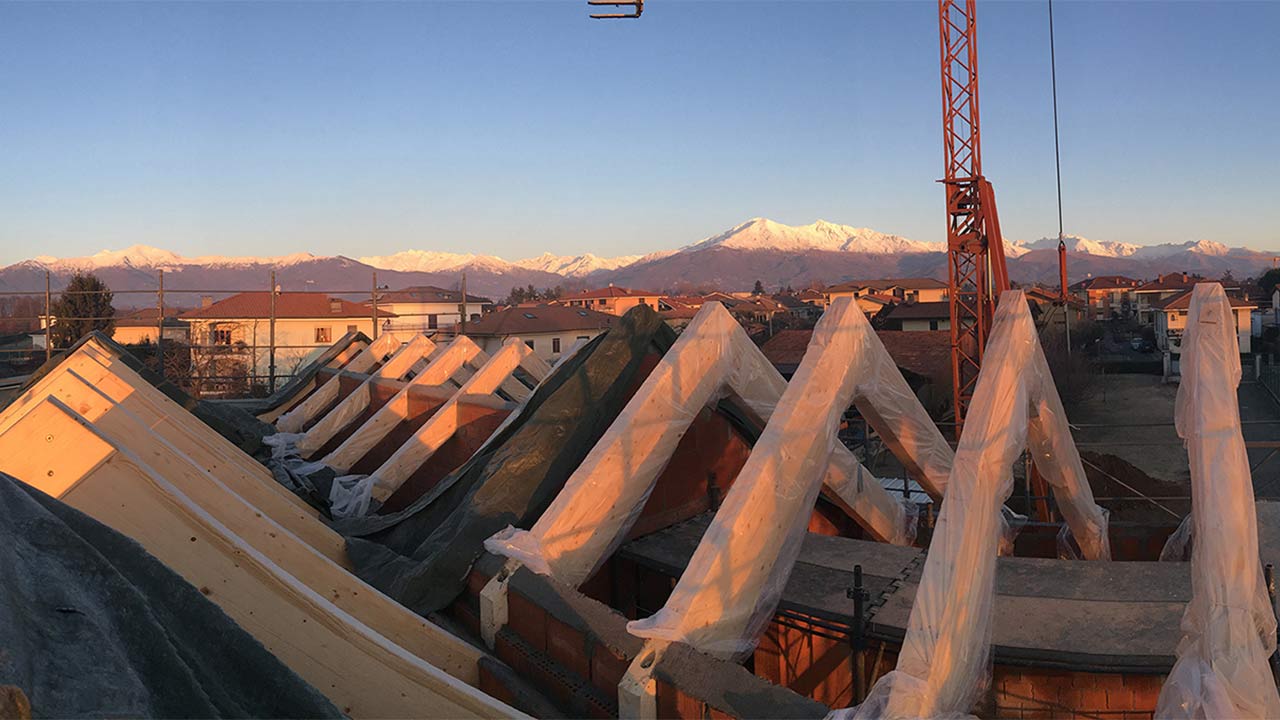 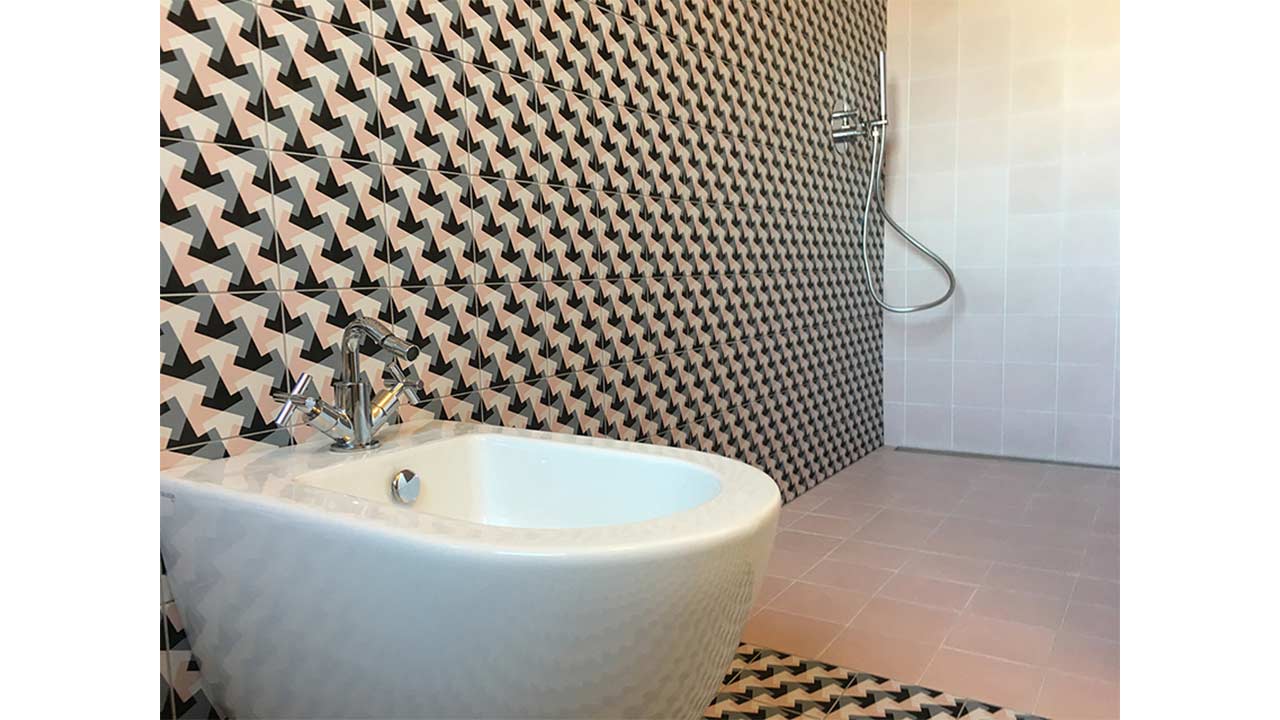