A spacious and bright flat in Turin. Interior and Lighting by Gabriella Loi architect. Planimetric study by Tullio Castagneri architect

The Interior and Lighting design project is inspired by the wish of the customers to live in a very modern and welcoming accommodation. Therefore, the architect Loi chooses to alternate materials and lights to create pleasant contrasts in all rooms. The abundant natural light is replaced in the evening hours by the recessed artificial light that illuminates the ceiling of a good part of the flat. The flooring in the housing is mainly in large oak planks, that cover the large surfaces. The parallelepiped in the living room is finished with a cement effect and illuminated with a wallwasher effect on the entire perimeter. The sofa area, in front of large windows, is made more private because of the parallelepiped that partially hides the view from the entrance. The dining area is furnished with antique table and four light chairs with essential lines and it’s illuminated by two wall sconces. The sliding windows accentuate the feeling of fluidity of the paths, while protecting the distinction in the different areas of the house. If you move into the kitchen, you’ll find the cement in the floor in large sheets. The white kitchen, framed by an anthracite blue background, offers a large work surface as requested by the owner. The only non-equipped wall is finished with a decoration based on lime pulled vertically. In the living area we find a guest bathroom characterized by a particular cylindrical steel sink, which incorporates the shapes of the kitchen hood. Elements of design are also the taps featuring an external tube that bends to convey the water inside the washbasin and which also acts as a towel holder (aesthetic and functional choice also due to reduced space). The walls are finished with a material effect that reproduces the stone and it’s in contrast with the gloss of the cylindrical sink, while inside the bathroom the walls are covered with a mosaic of very small dimensions and natural tones. Very simple spotlights and a black cylinder centered on the steel basin are illuminating the two small rooms. Passing through the dark window you move into the sleeping area: four bedrooms, the largest for parents with private bathrooms, a very large bathroom for the three children, a laundry room and a storage room at the end of the corridor. The parents’ bedroom is furnished with a cherry wood bed in warmer tones in contrast with a large wall with essential lines; it’s illuminated by four powerful wall lights with adjustable light beam. On the opposite side, the vertical wall that serves as the background to the bed, has been decorated with a raised material effect based on lime drawn horizontally. The two wall sconces of the bedside tables, with bidirectional light, highlight its specificity and materiality. The same decoration is found inside the bathroom belonging to the bedroom, in contrast with the dark tones of the slate slabs on the wall and the countertop of the sink of the same material. 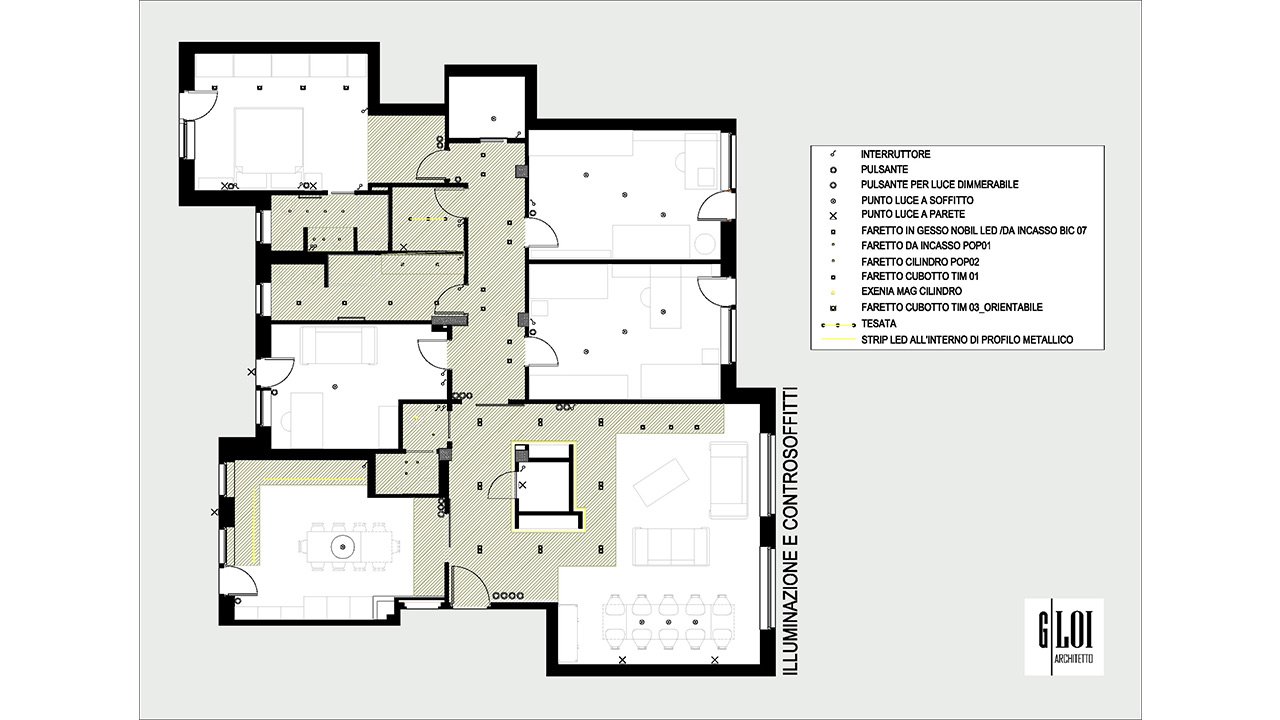 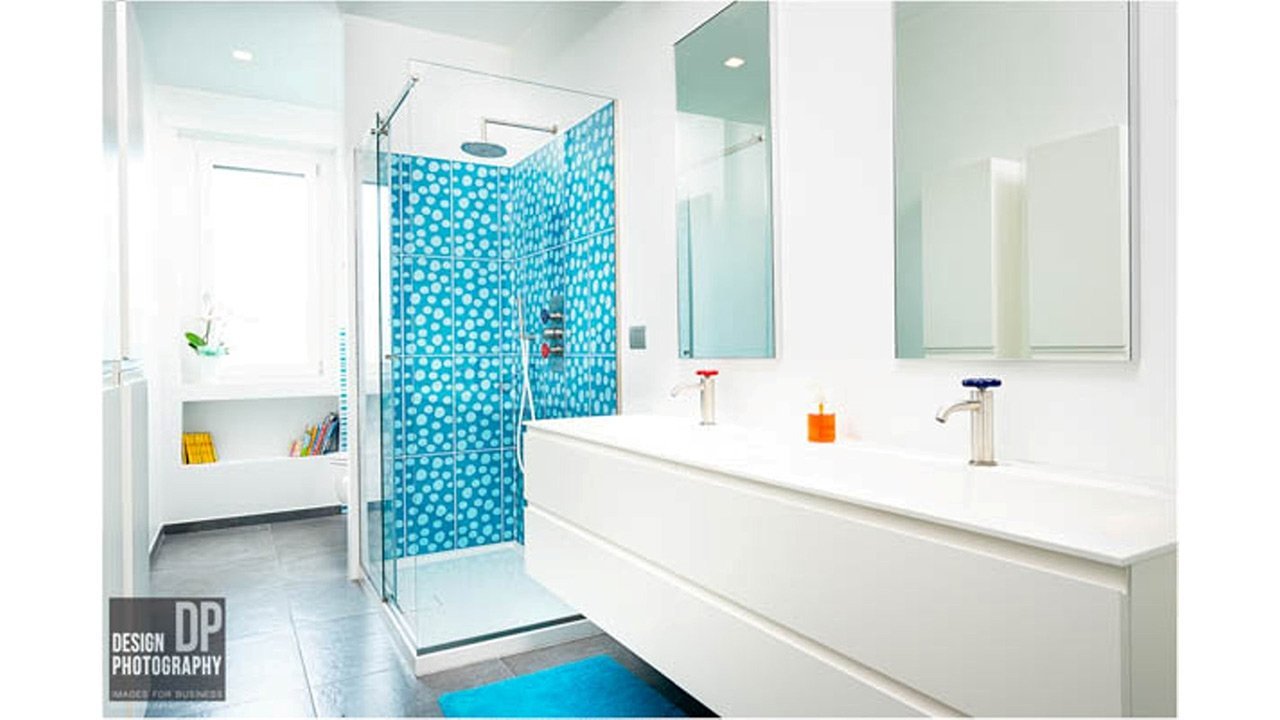 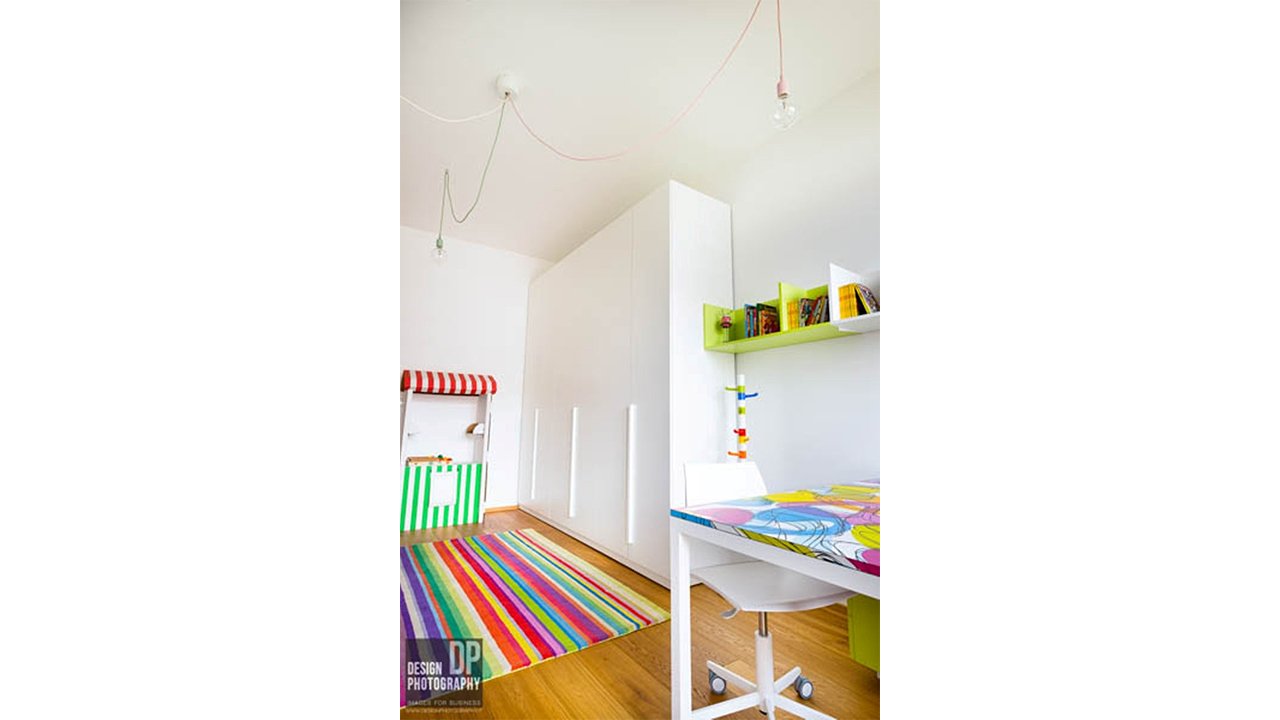 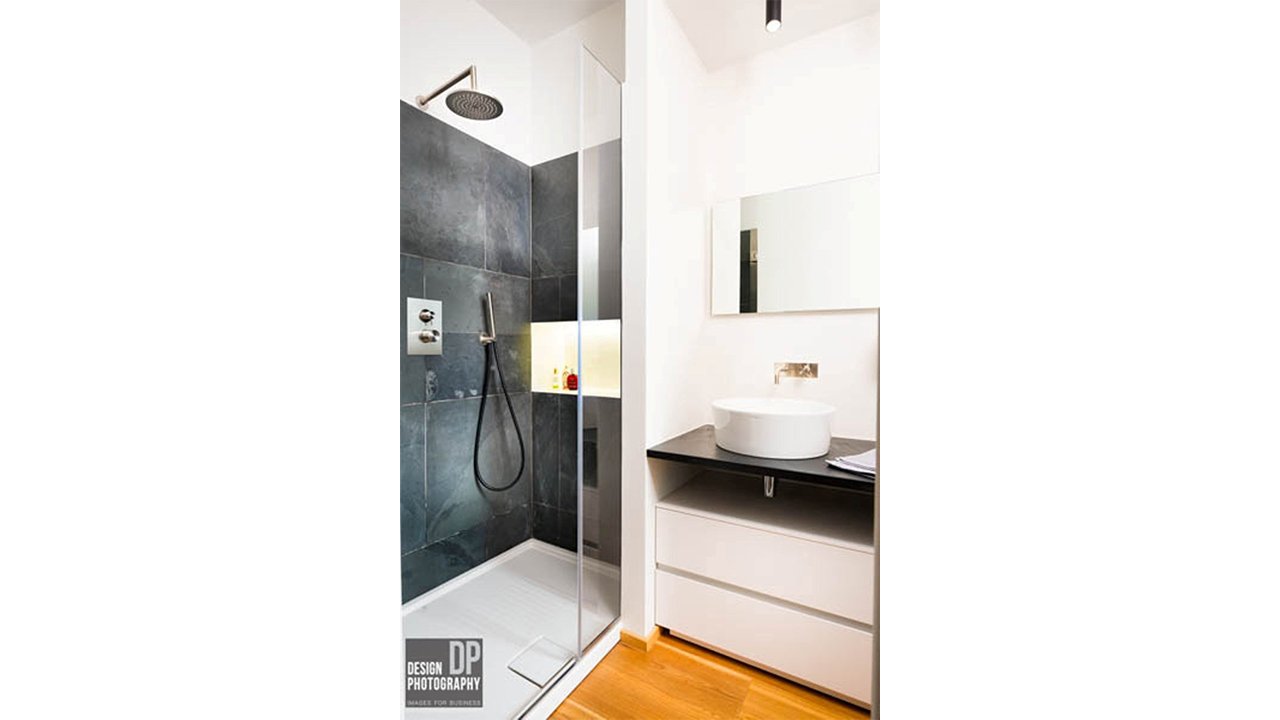 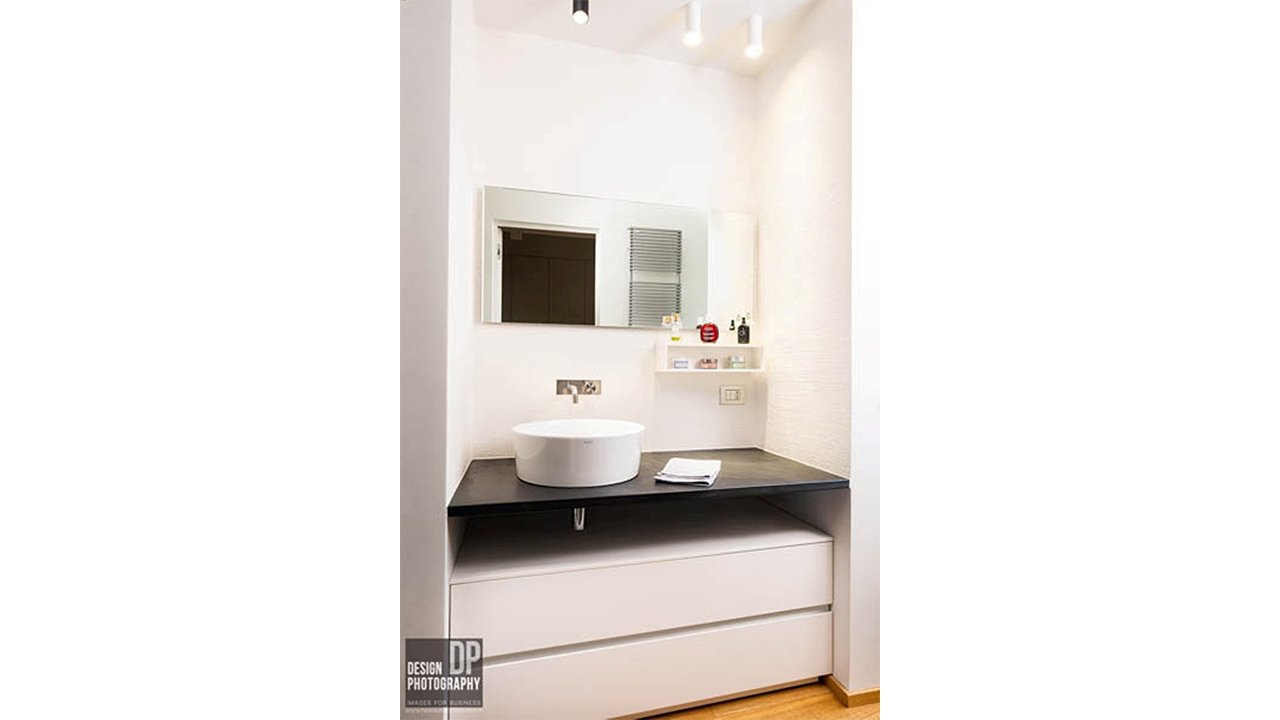 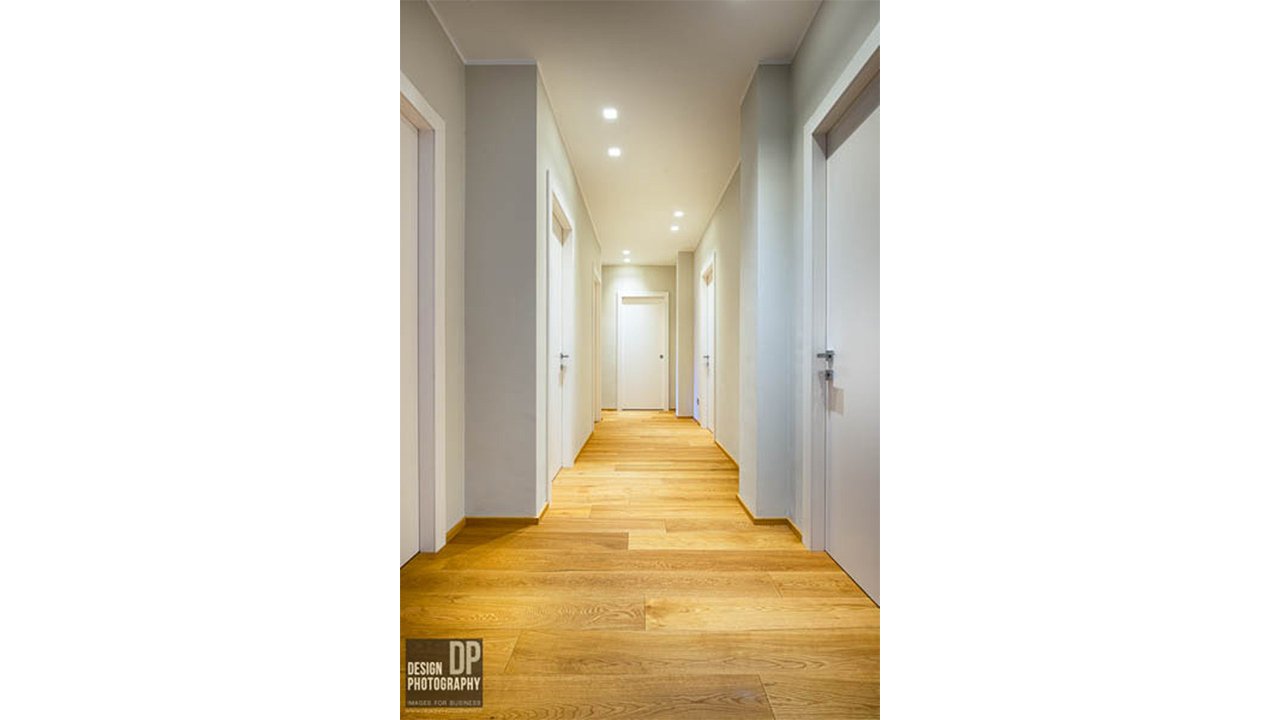 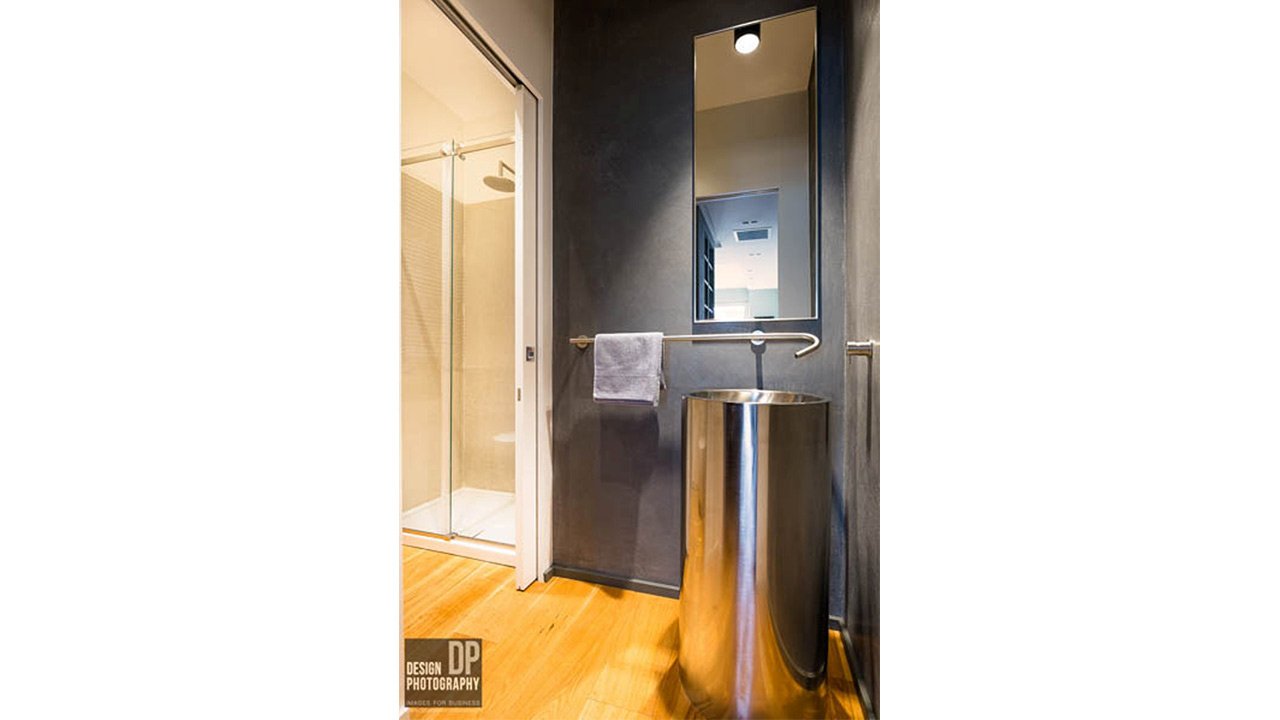 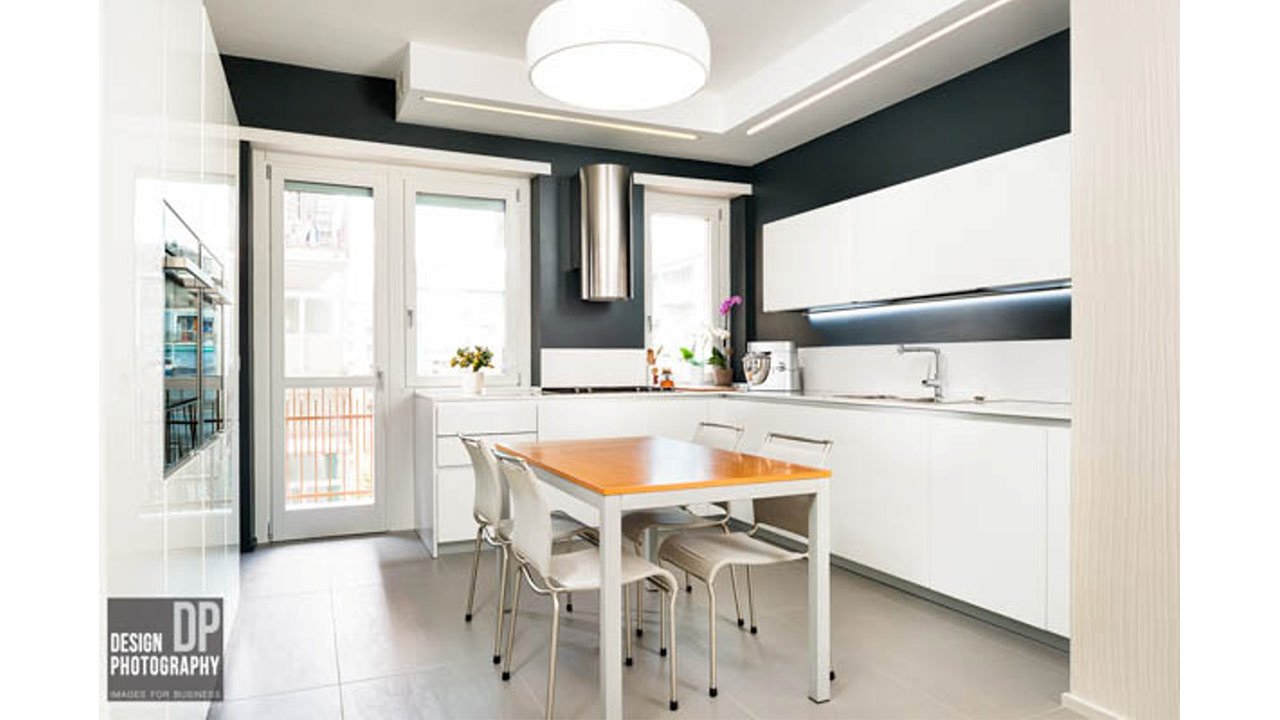 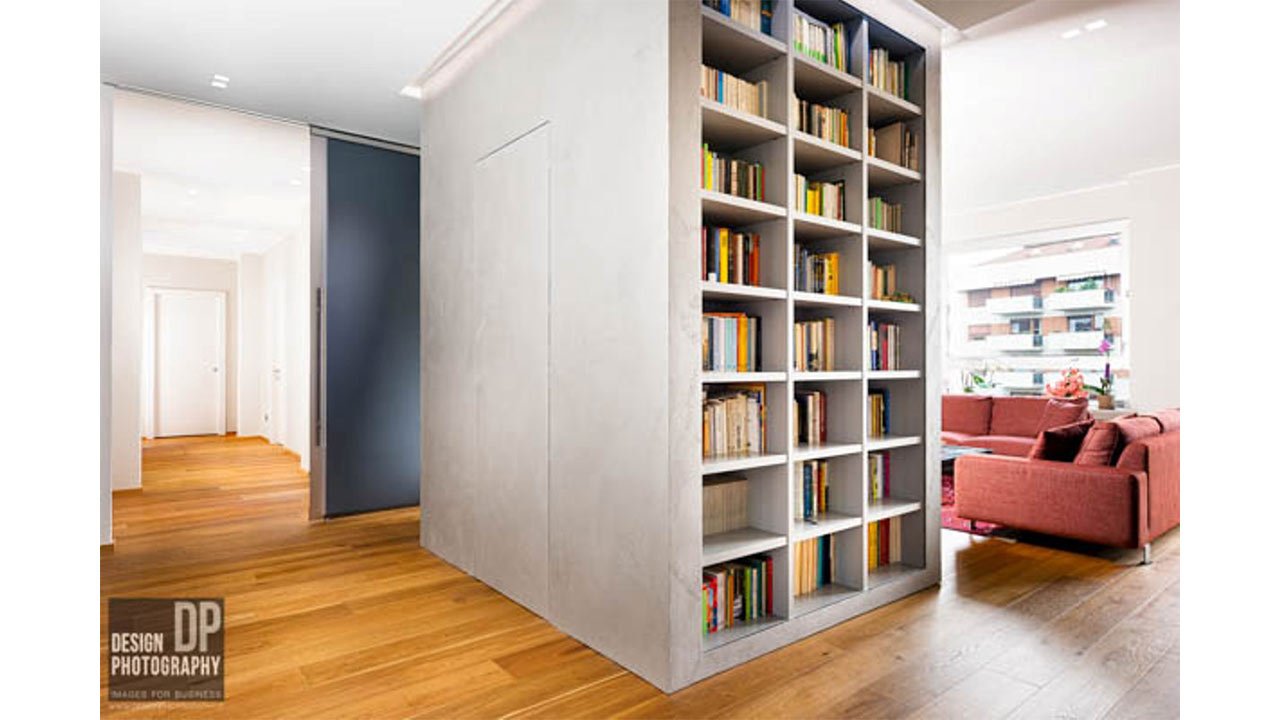 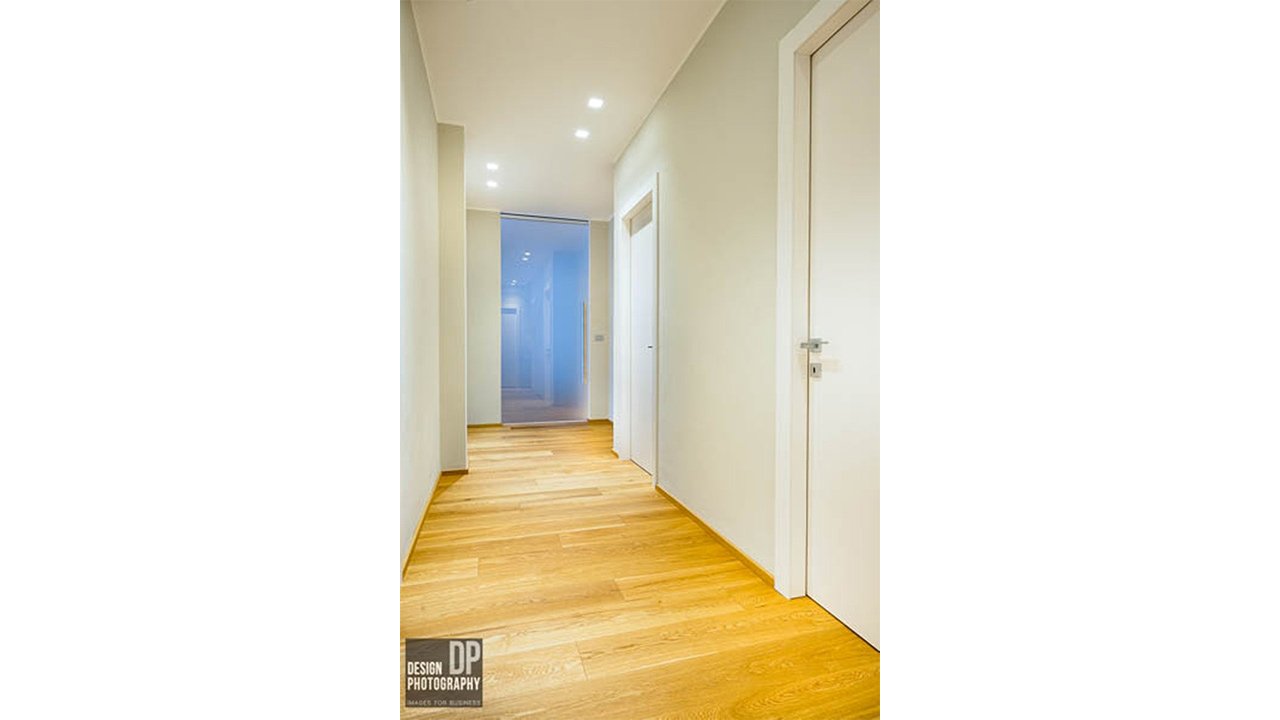 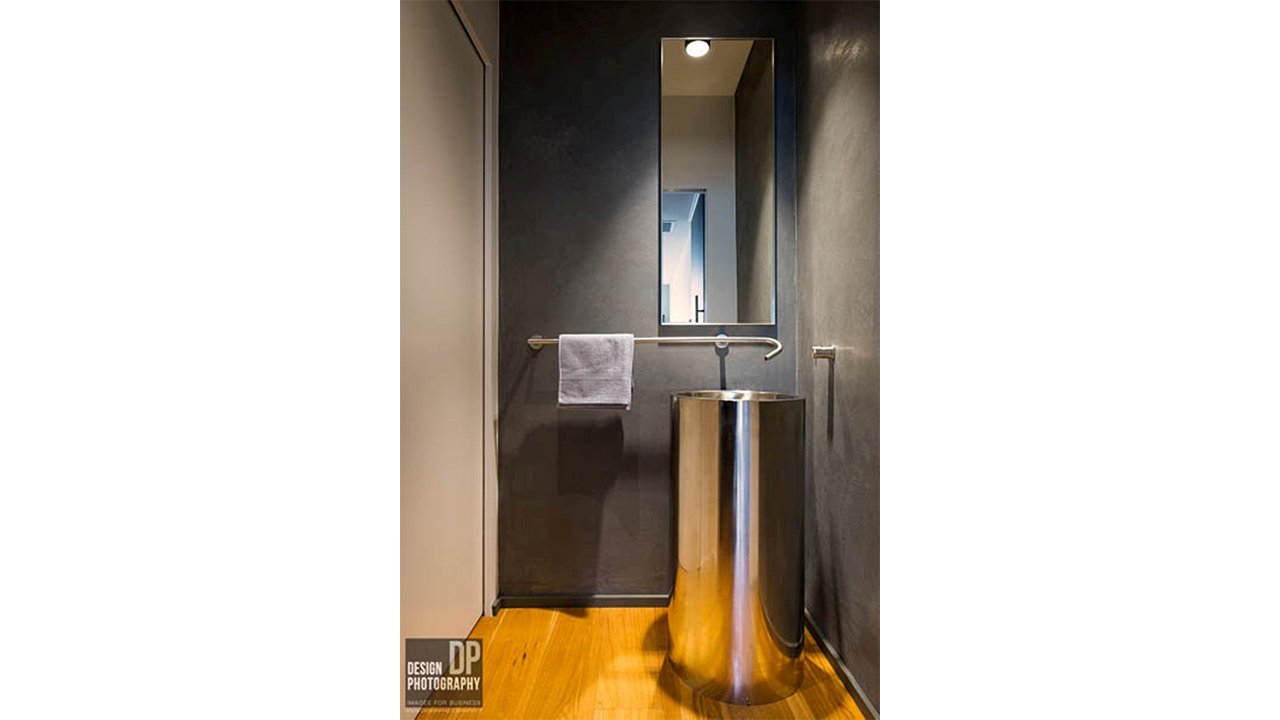 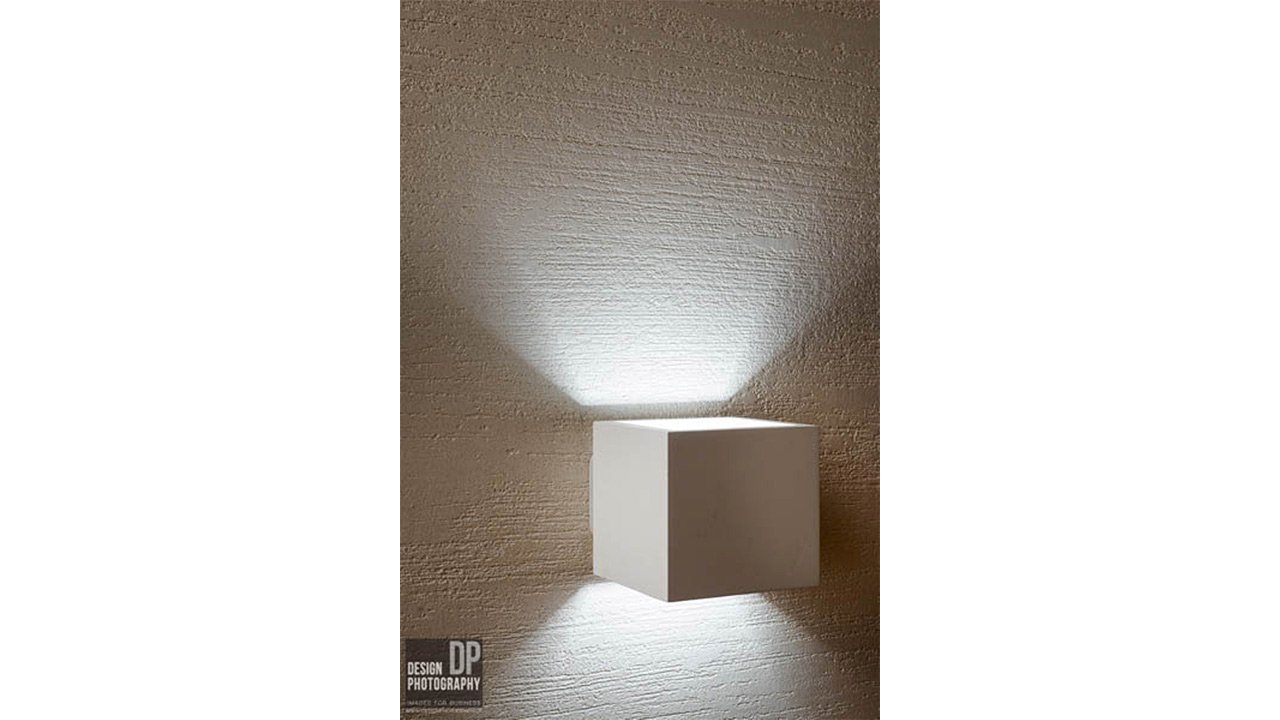 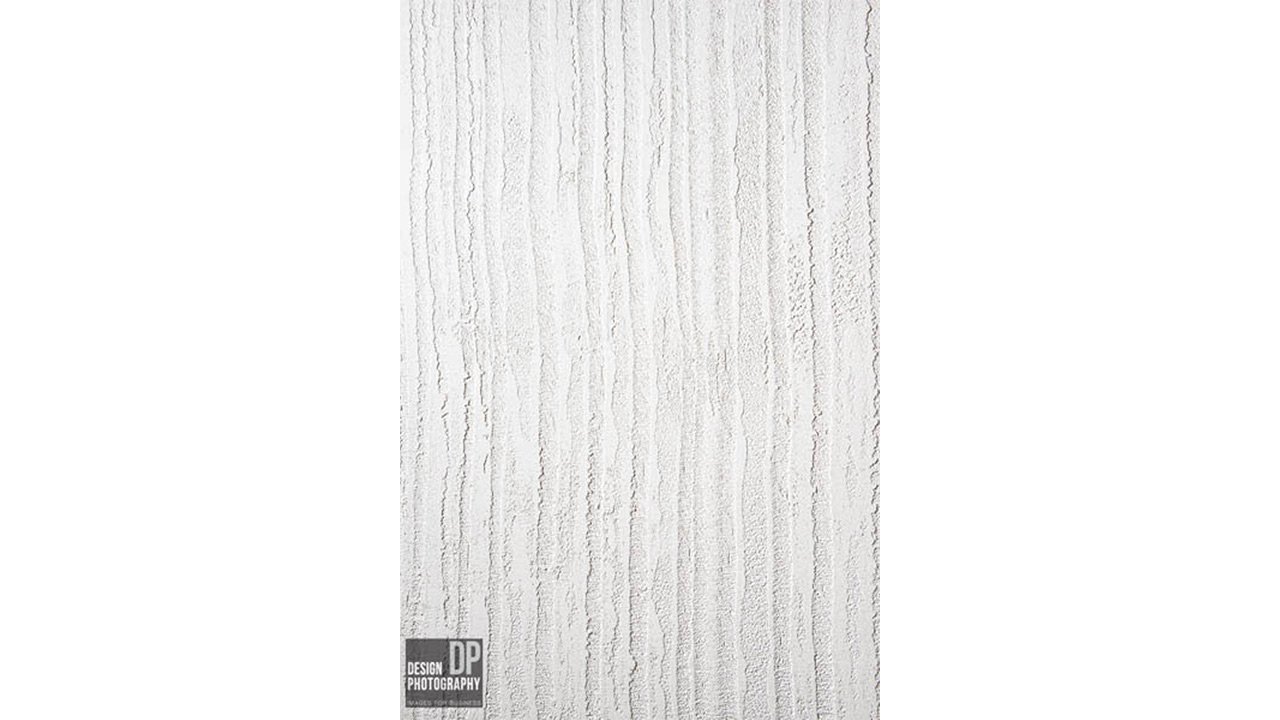 Studio di architettura di Gabriella Loi
The architect Gabriella Loi graduated in 2008 at the Polytechnic of Turin, II Faculty of Architecture with a thesis abroad at the Universidad de Belgrano, Buenos Aires, Argentina. She has carried out collaborative activities with professional studies in Turin about architectural and lighting design. Currently she carry out projects for individuals and compete in competitions. Parallel to the professional activity she takes care of artistic projects of painting. She lives and works in Turin. Contacts of the designer:<span class="im"> mobile 3284999517 e-mail <a href="mailto:architetto@gabriellaloi.com" target="_blank" rel="noopener">architetto@gabriellaloi.com</a> web site<a href="http://www.gabriellaloi.com/" target="_blank" rel="noopener">www.gabriellaloi.com</a></span>
http://www.gabriellaloi.com
Previous Article
Yanbu Cement Company
Next Article
Lamps Corbulait